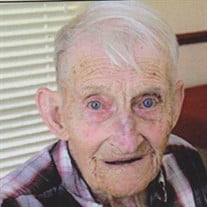 Albert (Aubby) Graichen, age 95, of Deckerville, died Friday December 5, 2014 in McLaren Port Huron Hospital. He was born September 16, 1919 in Delaware Township, the son of the late Walter and Bertha (Hirzel) Graichen. He married Norma L. Reichard on October 17, 1953 in Port Huron, she preceded in death on June 30, 1989. He later married Wanda M. Miller on August 17, 1992. Albert was a member of St. John Lutheran Church, Palms. He was a former employee of Deckerville Die-Form and an area farmer. He enjoyed playing Euchre, Horseshoes, Gardening and Traveling. He is survived by his wife Wanda, of Deckerville, two sons, Stanley of Fla., Carl of Deckerville, two daughters, Dorothy Graichen of Deckerville, and Sandra (Keith) Brinker of Snover, four grandchildren and several nieces and nephews. He was preceded in death by one brother Raymond and one sister Mrs. Harriet Krasutsky. Funeral services to honor the life of Albert C. Graichen will be 11:00 AM., Tuesday in the Apsey Funeral Home. Pastor Henry Hales will officiate. Burial will be in East Delaware Cemetery. Visitation will be 4:00 PM-9:00 PM., Monday. Memorials may be made to St. John Lutheran Church, Palms, or the Sanilac Medical Care Facility. Condolences may be sent on line to apseyfuneralhome.net

The family of Albert (Aubby) Graichen created this Life Tributes page to make it easy to share your memories.

Send flowers to the Graichen family.