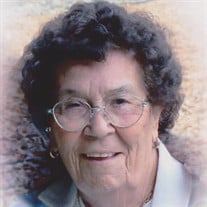 Audrey M. Pozsgay, age 97 of Deckerville, passed away Wednesday Nov. 26, 2014 in her home. She was born July 18, 1917 in Bad Axe, MI the daughter of the late James D. and Rose E. (Shagena) Morell. She married Stephen J. Pozsgay Sr. on February 1, 1936 in Argyle. He preceded in death November 23, 1986. Audrey co-owned the Silver Tavern in Deckerville along with her husband for 28 years. She was a member of St. Patrick’s Catholic Church, Palms. She is survived by 3 sons and 3 daughters, Stephen J. (Virginia) Pozsgay Jr., Michael (Marsha) Pozgay both of Deckerville, Daniel (Cindy) Pozsgay of Columbiaville, Irene Fuller of Lexington, Bonnie (Larry) Ross of Ubly and Audrey Parrott of Luzerne, 18 grandchildren, 31 great grandchildren and 14 great great grandchildren, two brothers Harley Morell of Kinston, and James Morell of Tawas, two sisters Mrs. Erdean Lingerfelt of Detroit, and Mrs. Erma Decker of Sandusky, a sister-in-law Mrs. Joyce Morell of Kingston and a brother-in-law Earl Robson of Deckerville. She was preceded in death by five brothers and six sisters. Funeral services to honor the life of Audrey M. Pozsgay will be 11:30 AM., Saturday in the Apsey Funeral Home. Fr. Todd Armberg will officiate. Burial will be in Downing Cemetery. Visitation will be 2:00-9:00 PM. Friday and from 10:00 AM., until the time of service on Saturday. Memorials may be given to Heartland Hospice or St. Patrick’s Catholic Church, Palms. Condolences may be sent on line to apseyfuneralhome.net

The family of Audrey M. Pozsgay created this Life Tributes page to make it easy to share your memories.

Send flowers to the Pozsgay family.