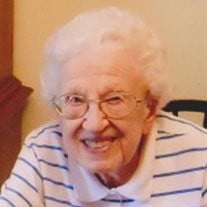 Belva L. Caswell, age 94, of Deckerville, died Monday, July 22, 2013 in Carol’s Adult Foster Care, Port Sanilac. She was born February 26, 1919 in Marlette, the daughter of the late Frederick and Edith (Simmons) Parrott. She married Francis Caswell on November 21, 1939 in Deckerville. He preceded her in death on June 30, 1995. Belva enjoyed sewing, reading, and traveling, along with spending time with her family. She is survived by her daughter, Barbara (Duane) Marquardt of Carsonville, two grandsons, Derek (Lori) Marquardt of Deckerville, and Brent Marquardt of Ft. Gratiot, three great grandchildren, Claire, Andrew, and Alexandra, three sisters-in-law, Mrs. Thelma Phillips of Decker, Mrs. June Caswell of Sandusky, and, Mrs. Laverna Caswell of Sandusky, one Aunt Mrs. Frances Simmons of Deckerville, several nieces, nephews, and cousins. She was preceded in death by four brothers, Glenn Parrott, Russell Parrott, Vernon Parrott, and Robert Parrott. Funeral services to celebrate the life of Belva L. Caswell, will be 11:00 AM., Thursday in the Apsey Funeral Home. Rev. Aaron Kemple will officiate. Burial will be in Downing Cemetery. Visitation will be 3:00-9:00 PM., Wednesday. Memorials may be given to Hartland Hospice or Deckerville Church of Christ. Condolences may be sent on line to apseyfuneralhome.net

The family of Mrs. Belva L. Caswell created this Life Tributes page to make it easy to share your memories.

Send flowers to the Caswell family.