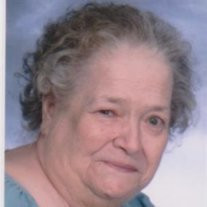 Beverly Jean Hayes, age 74, of Lapeer, formerly of Deckerville, died Tuesday April 23, 2013 in Paducah, KY. She was born May 4, 1938 in Deckerville, the daughter of the late Dewey and Alma (Howell) Parrott. She married James R. Hayes Sr., on Nov. 9, 1957. He preceded her in death on April 21, 2009. Mrs. Hayes enjoyed playing cards, Bingo, crossword puzzles, and she never met a stranger. Beverly is survived by four sons, and two daughters, Kenneth Hayes of IL., Sandy Brown of KY., Karla (John) Pettett of IN., James (Cindy) Hayes Jr. of MI., Michael (Crystal) Hayes of MI. and Matthew (Trisha) Hayes of IL., one brother, Veryal Parrott of Croswell, twenty two grandchildren and 19 great grandchildren, several nieces and nephews. She was preceded in death by four brothers, Donald Parrott, Wayne Parrott, Erwood Parrott, and Roger Parrott, also three grandchildren. Funeral services to celebrate the life of Beverly Jean Hayes will be 1:00 PM., Saturday in the Apsey Funeral Home. Rev. James Sheldrake will officate. Burial will be in Downing Cemetery. Visitation will be 11:00 AM., until the time of service on Saturday. Memorials may be given to the family discretionary fund. Condolences may be sent to http://apseyfuneralhome.net/

The family of Beverly Jean Hayes created this Life Tributes page to make it easy to share your memories.

Send flowers to the Hayes family.