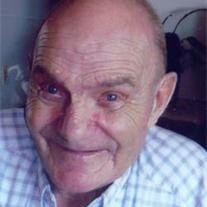 Bill (Willis) Merriman, age 83, passed away on Tuesday April 7, 2009 in the Deckerville Community Hospital after a short illness. He was born February 3, 1926 in Deckerville the son of the late Oscar and Amy (Fair) Merriman. Bill married Miss. Ileene Quandt on April 27, 1946. She preceded in death on January 30, 2009 Mr. Merriman worked for the United States Soil Conservation Service for 40+ years as a Soil Service Technician. He had a great love for the farmland and watersheds of Sanilac County. He enjoyed very much to help farmers to correctly tile drain their fields, dig or clean out a drain, or install a farm pond, or generally help farmer be good stewards of the soil and watersheds of the county. Bill had a great many friends in Sanilac County through his work in the Sandusky office. Besides working full time for the Soil Conservation Service, Bill and his wife Ileene had a small dairy operation outside of Deckerville. They worked together to keep this operation ongoing. Mr. Merriman was very devoted to his wife, family, and agriculture. He worked to raise a son and daughter, and granddaughter plus all the other jobs and hardships he had during his lifetime. He enjoyed going for rides in the countryside or watching his grandsons play football and his granddaughter play basketball. Bill will always be remembered by his family, friends, and caretakers for his big pleasing smile. He is survived by one son Randy (Dora) Merriman of Deckerville and one daughter Roxanne La Londe of Casper WY., four grandchildren and six great grandchildren, one sister Mrs. Ida Wagner of Mayville, one sister-in-law, Margaret Merriman of Deckerville, and several nieces and nephews. He was preceded in death by one granddaughter, Natalie Merriman, five brothers, Harleigh, Joel, Richard, David, and Frank, and three sisters, Dorothy Austin, Anne Thorn, and Ruth Cloutier. Funeral services to celebrate the life of Bill Merriman will be 11:00 AM., Saturday in the Apsey Funeral Home your ?Legacy of Life? funeral home. Pastor Chris Wolf will officiate. Burial will be in Zion Cemetery, Watertown, at 2:00 PM., Saturday. Visitation will be 3-9 PM., Friday. Memorial may be made to the Natalie Merriman Scholarship Fund at Deckerville Community Schools, or the 1st Presbyterian Church, Deckerville. Condolences may be sent to apseyfuneralhome.com

Bill (Willis) Merriman, age 83, passed away on Tuesday April 7, 2009 in the Deckerville Community Hospital after a short illness. He was born February 3, 1926 in Deckerville the son of the late Oscar and Amy (Fair) Merriman. Bill married Miss.... View Obituary & Service Information

The family of Bill Merriman created this Life Tributes page to make it easy to share your memories.