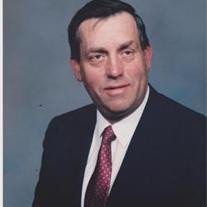 Blaine A. Kerbyson, age 74, of Deckerville, died Monday September 12, 2011 from injuries in a farming accident. He was born August 14, 1937 on the family farm in Marion Township, the son of the late Roy and Elsie (Sweet) Kerbyson. He married Lou Spencer on November 11, 1961 in Sandusky. Blaine owned a operated Kerbyson Meats since 1960. He was a life long farmer and builder, who enjoyed hunting and fishing. He served on the Deckerville Community School Board. Was currently a member of the Board of Directors at Exchange State Bank, a member and director of the Sanilac Sportsmen's Club, a member of the East Marion Baptist Church for the last forty six years, and served as a Deacon there. He was also a member of the Gideon's and served on the Marion Township Zoning Board. Over the years he was active in Real Estate Sales, Boat and Trailer Sales and a Federal Firearms Dealer. Most importantly he was a family man, spending time with his wife, children, and grandchildren. Mr. Kerbyson is survived by his wife, Lou of Deckerville, his son Rodney (Liane) Kerbyson of Hopkinton, NH., his daughter Kelly (Andrew) Longuski of Midland, five grandchildren, Sydney Kerbyson, Noah Kerbyson, Myah Kerbyson, Matthew Longuski, and Nicholas Longuski, also several nieces and nephews. He was preceded in death by one brother Leigh Kerbyson, and one sister Mrs. Ila Tarzwell. Funeral services to celebrate the life of Blaine A. Kerbyson will be 11:00 AM., Friday in the Apsey Funeral Home, Pastor's, David Frost and Paul Slivka will officiate. Burial will be in East Marion Cemetery. Visitation will be 5:00-9:00 PM., Wednesday and 3:00-8:00PM., Thursday. In lieu of flowers memorials may be given to the Deckerville Education Foundation/Blaine Kerbyson Scholarship. Condolences may be sent to http://apseyfuneralhome.net/

Blaine A. Kerbyson, age 74, of Deckerville, died Monday September 12, 2011 from injuries in a farming accident. He was born August 14, 1937 on the family farm in Marion Township, the son of the late Roy and Elsie (Sweet) Kerbyson. He married... View Obituary & Service Information

The family of Blaine Kerbyson created this Life Tributes page to make it easy to share your memories.

Send flowers to the Kerbyson family.