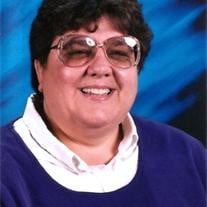 Rev. Carol S. Walborn, age 65, long-time resident of Croswell, passed away on May 3, 2012 in Select Specialty Hospital in Mount Clemens. She was born November 1, 1946 in Fremont, OH., the daughter of the late Walter K. and Sylvia L. (Ziegler) Walborn. Carol attended schools in Royal Oak and Almont, graduating from Almont High School in 1964. She attended Northern Michigan University, earning a teaching degree, and earned a Master's degree in Elementary Education from Central Michigan University. Carol spent the bulk of her career in education teaching Kindergarten and Young Fives in the Cross-Lex school system. Retiring from teaching in 2003, Carol took on a new career as a lay pastor in the United Methodist Church. She served as a pastor for the Dryden and Leonard churches until 2008 when health issues forced her to withdraw from full-time service. Not one to give up easily, Carol served as a volunteer chaplain at Yale Medilodge, and became active in the Yale United Methodist Church. She continued her activities in the church until early this year when worsening health issues made it impossible for her to continue. Her life was spent helping others and to the end it was her hope that she would get well enough to be able to again serve in some capacity. Carol is survived by her sister Joan (Tim) Juhl of Carsonville and nieces Wendy Juhl of Durant, OK., and Kristen (Zach) Pennock of San Antonio, TX. She also leaves behind many dear friends and family members who were important to her in her life. A celebration of the life of Carol Walborn will be held at the Yale United Methodist Church at 11:00 AM., Saturday, May 12, 2012. Rev. Dr. B. Daniels will officiate. Carol has requested that those attending leave their mourning clothes at home and dress in bright colors. A luncheon will be served at the church immediately following the service. Cremation has taken place. Memorials may made to the Yale UMC, Forester UMC or Sanilac County Humane Society. Arrangements were by the Apsey Funeral Home, Deckerville. Condolences may be sent to http://apseyfuneralhome.net/

Rev. Carol S. Walborn, age 65, long-time resident of Croswell, passed away on May 3, 2012 in Select Specialty Hospital in Mount Clemens. She was born November 1, 1946 in Fremont, OH., the daughter of the late Walter K. and Sylvia L. (Ziegler)... View Obituary & Service Information

The family of Carol Walborn created this Life Tributes page to make it easy to share your memories.

Send flowers to the Walborn family.