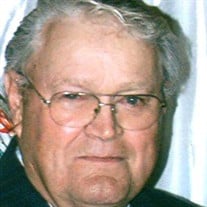 Clare E. Russell, age 89, of Palms, passed away Thursday May 18, 2017 in Autumnwood of Deckerville. He was born January 23, 1928 in Palms the son of the late Elmer and Christine (Seltz) Russell. He grew up on the family farm on Russell Road near Palms, MI. He attended the Mills Country School, and graduated from Deckerville Community High School In 1946. He married Miss. Shirley Greene on April 5, 1947 in Monroe, MI. Together they raised four children. He was a life member of Trinity Lutheran Church, Forestville, and a lifelong area farmer. He enjoyed playing cards, Golf, shooting pool, hunting, fishing, spending time with family and friends in his cabin in the woods. Clare is survived by his wife of 70 years, Shirley of Palms; daughters, Carol Whiting of Port Huron, Marsha (Mike) Pozsgay of Deckerville; sons, Tom (Karin) Russell and Rich Russell both of Palms; nine grandchildren, eight great grandchildren; sisters, Mrs. Audrey Schock of Cass City, twin sister Mrs. Clarice Montney of Traverse City and Mrs. Peggy (Walt) Montney of Lapeer; brother Clark Russell of NC; brother-in-law Glenn Russell of Port Huron; sister-in-law Marion Greene of Elk Rapids and several nieces and nephews. He was preceded in death by brothers-in-law, Harold Schock, Don Montney and William Greene; sisters-in-law Stella Russell and Mary Russell. Funeral services to honor the life of Clare E. Russell will be 4:00 PM Sunday in Trinity Lutheran Church, Forestville. Burial will be in the church cemetery. Pastor Richard Wilson will officiate. Visitation will be from 3:00 PM., until the time of service at church. Memorials may be given to Trinity Lutheran Church or Autumnwood of Deckerville. A meal will be provided by the Ladies Aide, immediately following the committal service. Arrangements are by the Apsey Funeral Home, Deckerville. Condolences may be sent on line to apseyfuneralhome.net

Clare E. Russell, age 89, of Palms, passed away Thursday May 18, 2017 in Autumnwood of Deckerville. He was born January 23, 1928 in Palms the son of the late Elmer and Christine (Seltz) Russell. He grew up on the family farm on Russell Road... View Obituary & Service Information

The family of Clare E. Russell created this Life Tributes page to make it easy to share your memories.