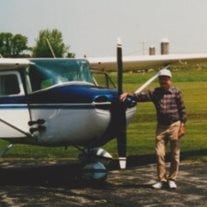 Dale Apsey age 86 of Deckerville, died February 18, 2014 in Autumnwood of Deckerville after an extended illness. Dale was born on the family farm located on the South city limits of Yale, MI., the son of the late Edmund and Sarah (Shephard) Apsey. He grew up there with his older brother Harold and younger brother Ronald, both deceased. With the family farm proximity to the city of Yale, several “barnstormers” would land their airplanes in the Apsey pasture field over the years and sell airplane rides to the public. This instilled the love of flying for Dale, who obtained his private pilot license around 1960. In 1945 Mr. Apsey was drafted into the US Army. He served in the European Theatre during the German occupation until 1947. Later that year he moved to Deckerville and entered into a partnership with Eugene Carman and opened the “Jewel Box” jewelry store on Main Street. In 1961 he closed the Jewel Box and became one of the Rural Letter Carriers out of the Deckerville Post Office, where he worked for thirty years. He served for many years as a Deckerville Fire Department Volunteer, and attended the Deckerville Bible Church. On April 22, 1950 he married Miss. Doris Wagner. He and Doris raised three sons, Bradley (Debbie) Apsey of Deckerville, Col. Douglas (Robin) Apsey of San Antonio, TX., and Thomas (Teri) Apsey of Deckerville. They have eight grandchildren, Maj. Andrew (Danelle) Apsey, Angela (Scott) Peruski, Ms. Jenny Apsey, Capt. Christian (Andrea) Apsey, Miss. Erin Apsey, Lt. David (Stephanie) Apsey, Michael Apsey, and Miss. Michelle Apsey and three great grandchildren, Drew Peruski, Ty Peruski, and Weston Apsey. Also, several nieces and nephews. Funeral services to celebrate the life of Dale Apsey will be 11:00 AM., Saturday in the Apsey Funeral Home. Pastor Jeff Homan will officiate. Burial will be in Downing Cemetery. Visitation will be 2:00-8:00 PM., Friday in the funeral home. Memorials may be given to the Deckerville Community Hospital or Deckerville Bible Church. Condolences may be sent to apseyfuneralhome.net

Dale Apsey age 86 of Deckerville, died February 18, 2014 in Autumnwood of Deckerville after an extended illness. Dale was born on the family farm located on the South city limits of Yale, MI., the son of the late Edmund and Sarah (Shephard)... View Obituary & Service Information

The family of Dale Apsey created this Life Tributes page to make it easy to share your memories.

Send flowers to the Apsey family.