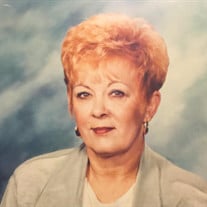 Diana K. Brown, age 70, of Deckerville passed away Wednesday October 26, 2016 in Autumnwood of Deckerville. She was born March 6, 1946 in Sandusky, the daughter of the late John and Mary (Smith) Bokach. She married William E. Brown Jr., on September 10, 1966 in Sandusky. Diana grew up in Carsonville and attended Carsonville Community School graduating in 1965. She later attended Beauty School in Port Huron and became a beautician. She owned and operated the Hair Stop in Deckerville. She also owned and operated, along with her husband, the Brown Party Stores throughout the Thumb of Michigan. Diana attended the Deckerville United Methodist Church, and was a member of the Deckerville Hospital Auxiliary. She enjoyed shopping, cooking, gardening and taking care of her grandchildren. Mrs. Brown is survived by her husband William Brown Jr., of Deckerville, two sons, William (Kristy) Brown III and Dan (LeAnn) Brown both of Deckerville, two brothers, Mark Bokach of AZ., and Richard (Mary) Bokach of Carsonville, one sister Deborah (Tom) Stone of Sandusky, Sister-in-law Carol Bokach of Six Lakes, seven grandchildren, Josie, Ali, Rachel, William IV, Aiden, Cooper, and Peyton Brown, and several; nieces and nephews. She was preceded in death by her parents, one brother John Bokach and sister-in-law Catherine Bokach. Funeral services to honor the life Diana K. Brown will be 11:00 AM., Monday in the Apsey Funeral Home. Burial will be in Downing Cemetery. Rev. Debra Brown will officiate. Visitation will be 1:00-8:00 PM., Sunday and 10:00 AM until the time of service on Monday. Memorials may be given to the Deckerville Hospital Auxiliary or Deckerville Education Foundation Condolences may be sent on line to apseyfuneralhome.net

Diana K. Brown, age 70, of Deckerville passed away Wednesday October 26, 2016 in Autumnwood of Deckerville. She was born March 6, 1946 in Sandusky, the daughter of the late John and Mary (Smith) Bokach. She married William E. Brown Jr., on... View Obituary & Service Information

The family of Diana K. Brown created this Life Tributes page to make it easy to share your memories.

Send flowers to the Brown family.