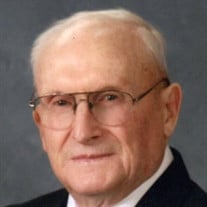 Donald John Cleland, age 88, passed away peacefully, surrounded by his family, on October 8, 2019 at Stonegate Village of Sandusky. He was born on August 6, 1931 at his grandparents’ farmhouse north of Deckerville, Michigan, to the late John E. and Edna L. Cleland. After graduating from high school in 1949, Donald worked at Henry James Tool and Die shop while continuing to dairy farm. Additionally, he served in the National Guard for three years. He married his longtime sweetheart Elva Jean Boldt in Forester, Michigan on October 16, 1954. As his family grew, he decided to dairy and crop farm full time. He retired from his long and successful career in farming at age 85. Donald is survived by his wife of 65 years, Elva J. Cleland of Deckerville; daughters, Patricia Cleland of Haslett, Michigan; Joan Cleland of Sandusky, Michigan; and Barbara (David Salko) Cleland of Norwalk, Connecticut; son, Roger (Kathy) Cleland of Deckerville, Michigan; and grandchildren, Jim (Amy) Heilig of Goldsboro North Carolina; Scott (Naysa) Heilig of Snover, Michigan; David Heilig, Seattle, Washington; and Jordan Cleland of Deckerville, Michigan. He also leaves behind cousin, Orville Hooper, as well as several great-grandchildren. He is preceded in death by his sister Eilene E. Cleland of Deckerville, Michigan. Donald attended East Marion Baptist Church. Throughout his life, he enjoyed playing euchre with friends and family, traveling in the U.S. and Canada, and eating lunch at local restaurants with his wife. He was a steadfast source of support to his family members. Funeral services to celebrate the life of Donald John Cleland will be at Noon, Saturday, October 12, 2019 at the Apsey Funeral Home in Deckerville. Pastor David Frost will officiate. Burial will be in Downing Cemetery. Visitation will be at 10:00 AM., until the time of service on Saturday. Memorials can be made to East Marion Baptist Church in Deckerville, Michigan. Condolences may be sent online to apseyfuneralhome.net.

Donald John Cleland, age 88, passed away peacefully, surrounded by his family, on October 8, 2019 at Stonegate Village of Sandusky. He was born on August 6, 1931 at his grandparents&#8217; farmhouse north of Deckerville, Michigan, to the late... View Obituary & Service Information

The family of Donald J. Cleland created this Life Tributes page to make it easy to share your memories.

Send flowers to the Cleland family.