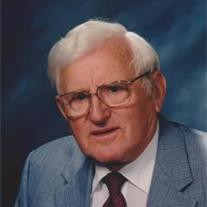 Donald E. Kenny, age 87, of Deckerville, died Saturday February 9, 2013 in Autumnwood of Deckerville. He was born June 27, 1925 in Palms, MI., the son of the late Lloyd and Nora (Moffett) Kenny. Donald married Miss. Betty Bracken on May 29, 1948 in Snover. He was a veteran of WWII serving in the US Army. He was a retired lineman for General Telephone. Don enjoyed playing shuffle board, cards and fishing and hunting. He is survived by his wife, Betty of Deckerville, three sons, Larry Kenny of Deckerville, Dale (Joyce) Kenny of Houghton Lake, James Kenny of Snover, one daughter Cheryl Kenny of Deckerville, six grandchildren, and nine great grandchildren, one brother Richard Kenny of Frazier, and one sister, Vivian DeBono of Clinton Township, and several nieces and nephews. Funeral services to celebrate the life of Donald E. Kenny will be 1:00 PM., Wednesday in the Apsey Funeral Home. Pastor Jerry Griggs will officiate. Burial will be in Downing Cemetery. Visitation will be 4:00-9:00 PM., Monday and 2:00-9:00 PM., Tuesday, and 11:00 AM., until the time of services on Wednesday. Memorials may be given to the McGregor Methodist Church. Condolences may be sent to http://apseyfuneralhome.net/

The family of Donald Kenny created this Life Tributes page to make it easy to share your memories.

Send flowers to the Kenny family.