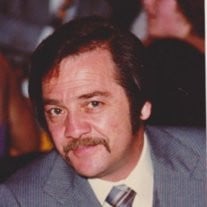 Donald L. Kidder, age 77, of Forester Township, died Friday, August 16, 2013 in the Deckerville Community Hospital. He was born October 10, 1935 in Cadillac, MI., the son of the late Thomas and Marjorie (Bunn) Kidder. He married Elaine Newkirk on June 14, 1980 in New Baltimore. Mr. Kidder worked for the Ford Motor Company for over 36 years. He was a member of UAW Local 2280. He enjoyed being with family, yard work, making Christmas ornaments, and all around handyman. Donald is survived by his wife, Elaine of Forester Township, one son Brian (Kimberly) Kidder of Roseville, three step-sons, J.R. Smith and Duane Smith both of Kalamazoo, Darryl (Maureen) Smith of Roseville, one daughter Ms. Sandy (Tom Brown) Wilds of Algonac, two brothers, Thomas (Edra) Kidder of CA., and twin brother Phillip Kidder of Sterling Heights, one sister-in-law, Mrs. Jeanie Robertson of AZ., ten grandchildren and six great grandchildren, and several nieces and nephews. He was preceded in death by one brother, Stuart Kidder. Funeral services to celebrate the life of Donald L. Kidder will be 4:00 PM., Monday in the Apsey Funeral Home. Rev. Ellen Schippert will officiate. Interment will be at May Memorial Crematory. Visitation will be from 11:00 AM., until 4:00 PM., on Monday. Memorials may be given to the Forester United Methodist Church. Condolences may be sent on line to apseyfuneralhome.net

The family of Donald Lynn Kidder created this Life Tributes page to make it easy to share your memories.

Send flowers to the Kidder family.