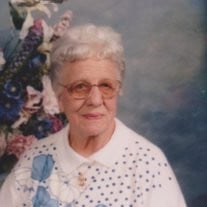 Doris Van Natter Norton, age 90, of Deckerville, died Sunday October 6, 2013, in Touch of Gold Nursing Home. She was born July 9, 1923 in Port Huron, the daughter of the late Rex and Sadie (Allen) Lenk. She married John C. Van Natter on March 24, 1943. He preceded in death on March 11, 1981. She then married George Norton on August 28, 1982. He preceded in death on June 27, 1991. Doris and her first husband ran the Rexall Drug Store in Deckerville and later the Richmondville General Store. She was a life member of O.E.S #400 Marion, and later affiliated with O.E.S #185 Port Sanilac. She played the piano and organ for many churches in the area and for many funerals and weddings over the years. She was active in many of the area clubs. And a member of the 1st Baptist Church of Deckerville. Mrs. Norton is survived by one daughter, Mrs. Laura Gough of Deckerville, three grandchildren, Paul Hardison, Paula Hardison, and Dayna (Dustin) Elliott, two great grandchildren, three brothers, Donald Lenk of Deckerville, Gary Lenk of St. Clair Shores, and Dennis Lenk of Vassar, one sister, Mrs. Marian (Wendell) Manchester of St. Clair, several nieces and nephews, one step-son, Gary Norton and one step-daughter Mrs. Gayle Schultz. She was preceded in death by one son John W. Van Natter, four brothers, Alan, Bernard, Duane, and Martin Lenk. Funeral services to celebrate the life of Doris Van Natter Norton will be 11:00 AM., Thursday in the Apsey Funeral Home. Pastor Jedediah Willis will officiate. Burial will be in Forester Cemetery. Visitation will be 4:00 PM.-8:00 PM., Wednesday. Memorials may be given to the 1st Baptist Church or Hometown Hospice. Condolences may be sent on line to apseyfuneralhome.net

The family of Doris Van Natter Norton created this Life Tributes page to make it easy to share your memories.

Send flowers to the Norton family.