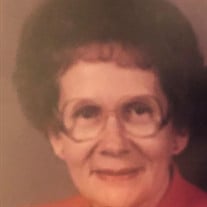 Elizabeth (Betty) Louise Pohl, age 95, of Palms, Michigan, passed away peacefully in her sleep on Monday, March 7, at her home in Winter Haven, Florida. Her loving daughter Laurie was at her side. She and her brother Glenn were caretakers for Elizabeth for many years. Elizabeth was born on December 9, 1926, in Detroit, Michigan. Her parents were the late Agnes (Bochstahler) and August Neukamm. She had two brothers, Fred and David. Elizabeth married Gerald Pohl, a dairy farmer, on June 14, 1947. The couple built a farmstead on Snay Road and farmed for many years. In the early 1980s they began spending winters in Florida and were snowbirds for over three decades together. Elizabeth was a devout member of Trinity Lutheran Church, Forestville, where she taught Sunday school and Bible school. She was an active member of the church choir, Ladies Aid and the Women's Missionary League. She was a 4-H teacher, a Tigers baseball fan and an avid reader. She loved playing pinochle and euchre, and enjoyed spending time with her grandchildren and great-grandchildren. She worked in the records department of the Deckerville Hospital for many years. Elizabeth is survived by son Gary (Sue) of Hurdle Mills, North Carolina; daughter Kathy (Bruce) of Sussex, Wisconsin; daughter Laurie Todd, Winter Haven, Florida; son Glenn, Palms, Michigan; and son Jim, also of Palms. Also surviving are many beloved grandchildren and great-grandchildren, as well as nieces and nephews, and numerous relatives in Canada, where Elizabeth and her family regularly attended family reunions. Well-known for her kind and generous heart, Elizabeth welcomed many people into her loving extended family throughout her life. Preceding Elizabeth in death were husband Gerald, her parents Agnes and August Neukamm, brother Fred, and two special aunts--Louise Lapp (Bochstahler) and Anna Neukamm. Also numerous other aunts, uncles and cousins, plus special friend Eleanor Durand, and lifelong friends, Margaret Lenn and Shirley White. A memorial service will be held Thursday May 5, 2022 at 11:00 AM. Visitation will be from 10:00AM until the time of service. Burial will be in the Trinity Lutheran Church Cemetery. Memorial contributions can be sent to Trinity Lutheran Church, Forestville...or to the Deckerville Community Hospital. Apsey Funeral Home is handling the arrangements. Condolences may be sent online to apseyfuneralhome.net

Elizabeth (Betty) Louise Pohl, age 95, of Palms, Michigan, passed away peacefully in her sleep on Monday, March 7, at her home in Winter Haven, Florida. Her loving daughter Laurie was at her side. She and her brother Glenn were caretakers for... View Obituary & Service Information

The family of Elizabeth (Betty) Pohl created this Life Tributes page to make it easy to share your memories.