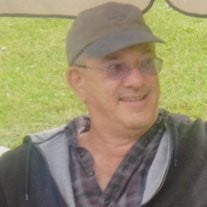 Ernest T. Bezemek, age 58, of Deckerville, died Friday, August 23, 2013 in Autumnwood of Deckerville. He was born January 10, 1955 in Sandusky, the son of the late Ernest B. Bezemek and Betty (Franzel) Bezemek. Ernie was employed at Midwest Rubber Co., since 1973. He enjoyed restoring cars and tractors in his shed, along with snowmobiling and being with his family and grandchildren. He is survived by his wife Kathy of Deckerville, son Jacob (Tonya Koroleski) Bezemek of Deckerville, two daughters, Melissa (Richard Jr.) Spranger of Reese, and Renae (David Gross) Bezemek of Saginaw, grandchildren Emily and Adrienne Spranger, Logan Kneffel, Lillian, Summer, and Samuel Bezemek, and Dylan Gross, his mother Mrs. Betty Bezemek of Minden City, five brothers Ed and Val Bezemek of Argyle, Rick Bezemek of Deckerville, John and Nancy Bezemek of Carsonville, Dan and Janeen Bezemek of Minden City, Tim and Linda Bezemek of West Bloomfield, several nieces and nephews, Mother-in-law, Bonnie Bright of Deckerville, two brothers-in-law, Gary and Doreen Bright of Deckerville, Steve and Vicky Bright of Sandusky, two sisters-in-law, Dan and Cindy Pozsgay of Columbiaville, and Sherrie Armstead of Deckerville. He was preceded in death by two brothers, Jerry and Tom Bezemek, and one sister Marie Reigel. Funeral Mass to celebrate the life of Ernest T. Bezemek will be 11:00 AM., Monday in St. Patrick Catholic Church, Palms, Fr. Todd P. Amberg will officiate. Interment will be at May Memorial Crematory. Visitation will be 2:00-9:00 PM., Sunday in the Apsey Funeral Home, and 10:00 AM., until the time of service at church on Monday. Memorials may be given to the Family Discretionary Fund. Condolences may be sent on line to apseyfuneralhome.net

Ernest T. Bezemek, age 58, of Deckerville, died Friday, August 23, 2013 in Autumnwood of Deckerville. He was born January 10, 1955 in Sandusky, the son of the late Ernest B. Bezemek and Betty (Franzel) Bezemek. Ernie was employed at Midwest... View Obituary & Service Information

The family of Ernest T. Bezemek created this Life Tributes page to make it easy to share your memories.

Send flowers to the Bezemek family.