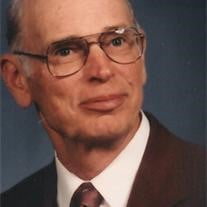 Eugene Curtis Regentin, 86, of Carsonville, passed away peacefully Saturday, June 5, 2010 at Port Huron Hospital surrounded by family. Gene was born January 6, 1924 to August and Louise Regentin on the family farm in Delaware Township. He graduated from Deckerville High School in 1942. He remained on the family farm and farmed there for many years before becoming Sanilac County Equalization Director, a position he held for 31 years before retiring in 1986. He had previously served as a Delaware Twp. Supervisor. He married F. Corrine Soehner on September 4, 1948 at St. John Lutheran Church, Palms, by Rev. Martin Dienst. Their wedding was the first marriage ceremony performed in the church. Carrying on his memory is his wife of 62 years, Corrine of Carsonville; five children, Daniel Regentin of Bay City and special friend Chris Munley, Kenneth Regentin of Potterville and special friend Diane Norton, Randy (Lyn) Regentin of Deckerville, Douglas (Kerry) Regentin of Deckerville, and Janet (Steve) Grimm of Byron Center, MI; siblings Gilbert (Arlene) Regentin of Ubly and Gertrude Breidenbach of Stow, Ohio; grandchildren, Jennifer (Chris) Szychowski of California, Jody (Brian) Zinn of Edmore, MI, Shannon (Tom) Arbaugh of Deckerville, Jeff Regentin of Palms, and Riley Regentin of Deckerville; two step-grandchildren, Abigal and Ethan Grimm of Byron Center; several great-grandchildren and nieces and nephews including Jeanne and Jim Burgess of Shelby Twp. He was preceded in death by a brother , Edward and his wife Pauline Regentin, brothers-in-law, Emerson Breidenbach and Carl Soehner, and sister-in-law, Phyllis and her husband Clair Hall. Gene and Corrine spent their winters in Zephyrhills, Florida upon his retirement as Equalization Director. He enjoyed playing cards, especially euchre and pinochle, spent many enjoyable rounds on the golf course (including two holes-in-one), loved watching the Detroit Tigers and enjoyed woodworking and working outdoors. Gene was also very active at St. John?s Lutheran Church and was proud to have helped build it. Funeral Services will be held Wednesday, June 9, at St. John Lutheran Church, Palms. Visitation will be Tuesday at the Apsey Funeral Home of Deckerville from 2:00-5:00 p.m. and 7:00-9:00 p.m. and from 10:00 a.m. until the time of service at the church. Memorials may be made to St. John Lutheran Church, Palms.

The family of Eugene Regentin created this Life Tributes page to make it easy to share your memories.

Send flowers to the Regentin family.