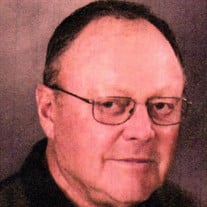 Tom Rumble, 78, passed away on February 19, 2019, at home surrounded by his family. Eugene Thomas Rumble was born on May 13th, 1940 in Marysville, MI. He graduated from Deckerville High School in 1960, to his mother’s great relief. Tom married the love of his life, Carol Rader, July 31, 1965 in Turner, MI. Tom started trucking and milk hauling at an early age. He worked for his lifelong friends Floyd and Florence Baumeister for many years. Upon their retirement, Tom and Carol bought the milk-hauling business and it began Rumble Milk Hauling Inc. Tom considered his milk shippers his second family, enjoyed their friendship and their breakfast. The farm kids will remember him fondly for tossing candy out the window. Tom hauled milk for over 50 years. In 2000 Tom and Carol with their children expanded their trucking business to include freight hauling and expanded to over 150 trucks. Tom’s drivers will forever remember the lectures on keeping their trucks clean. Tom worked hard and played hard. He was known as a prankster, loved driving fast, or just driving anywhere, including down sidewalks, railroad tracks, through ditches and one time right through his neighbor’s garage. He loved boating and enjoyed waterskiing until he was late into his 60s. He relished driving his restored 1962 Chevy pickup and cherished his winters in Florida. Tom’s favorite place on earth, other than his home, was Lake Bellaire, MI. Tom loved staying in touch with close and distant relatives. He enjoyed his trips to the coffee shop where he and his friends swapped stories. Tom was a member of the Deckerville United Methodist Church. Tom truly encapsulated a rare combination of someone who had a love of life and God with a firm understanding of what was important - the simplicity of living a life with those you love. Tom and Carol resided in Deckerville (“I live 3 miles East of Deckerville” as Tom was fond of saying) and had four children that loved and respected him dearly, Julie (Dan Fagan), LeAnn (Dan Brown), Lisa and Don (Lacey) Rumble. Tom is survived by his wife Carol who lovingly cared for him through sickness and in health, brothers and sisters, Donna (Rumble) and Jerry Hoffman, Mary Jane (Rumble) Vanderlip, Ted and Bonnie Rumble, Judy (Rumble) Woodard, Sally (Rumble) and Mark Paterson and special cousin, with sister status, Shirley (Rumble) Tanton. Tom was the proud Grandfather of Abbey, Caden, Maia and Jack Fagan, Madalyn, Isabella and Charlie Rumble, and Cooper and Peyton Brown. Tom is preceded in death by his parents Betty June (Lucas) Rumble and Donald Kermit Rumble, Brother-in-laws Robert Vanderlip, Terry Woodard, Alan Hillman, Paul Meredith and Bill Rader. Visitation and a celebration of Tom’s life will be held at Apsey Funeral Home in Deckerville, MI - Saturday February 23rd, from 2pm to 8pm and on Sunday February 24th from 12pm to 1pm. Funeral services will be held on Sunday the 24th at 1pm at Apsey Funeral Home. Rev. David Frost will officiate. Burial will be in the Downing Cemetery. Memorials may be given to Deckerville Educational Foundation or Deckerville Community Hospital. Condolences may be sent on-line to apseyfuneralhome.net

Tom Rumble, 78, passed away on February 19, 2019, at home surrounded by his family. Eugene Thomas Rumble was born on May 13th, 1940 in Marysville, MI. He graduated from Deckerville High School in 1960, to his mother&#8217;s great relief. Tom... View Obituary & Service Information

The family of Eugene Tom Rumble created this Life Tributes page to make it easy to share your memories.

Send flowers to the Rumble family.