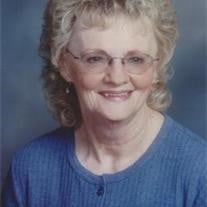 Evelyn Dawson Mills, age 73, of Port Sanilac, died Sunday June 17, 2012, in Covenant Hospital, Saginaw. She was born October 5, 1938 in Wyondotte, the daughter of the late William and Kristina (Click) Tolbert. She married Thomas Dawson on August 2, 1957 in Detroit. He preceded in death on February 11, 1995. She then married Duane Mills on January 2, 2001 in Sandusky. Evelyn was a member of the 1st Presbyterian Church of Deckerville. She co-owned and operated Teve's Bar in Deckerville for many years. She is survived by her husband Duane of Port Sanilac, one son Doug Dawson of OH., two daughters Ms. Laura Glashauser of Canton, and Ms. Kristina Dedrich of Holly, four grandchildren and one great grandchild, two brothers Earl Tolbert of Wyondotte, William Taylor of Emmett, two sisters, Ms. Shirley Bloink of NV., and Dorothy Cafluca of CA., along with several nieces and nephews. She was preceded in death by one sister Ms. Violet Click. Funeral services to celebrate the life of Evelyn Dawson Mills will be 1:00 PM., Friday in the Apsey Funeral Home, Rev. Marjorie Ackerman will officiate. Burial will be in Downing Cemetery. Visitation will be 5:00-9:00 PM., Wednesday and 2:00-9:00 PM., Thursday and 10:00 AM., until the time of the service on Friday. Memorials may be given to the 1st Presbyterian Church of Deckerville or Donor's Choice. Condolences may be sent to http://apseyfunerahome.net/

The family of Evelyn Mills created this Life Tributes page to make it easy to share your memories.

Send flowers to the Mills family.