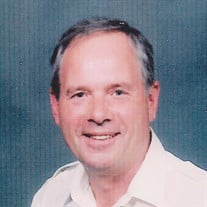 Frederick P. Leibinger, age 73, of Deckerville, passed away Thursday August 13, 2015, in the Deckerville Community Hospital. He was born December 4, 1941 in Detroit, the son of the late Philip and Katherine (Mathews) Leibinger. Fred married Miss. Barbara J. Lamont on July 14, 1962 in Port Sanilac. He was a lifelong area farmer, and worked part time for Sanilac Plumbing and Heating. He was a private pilot who had his own landing strip on his farm. He enjoyed his family and driving his Model A Ford. He also was a life member of the Knights of Columbus. Fred is survived by his wife Barbara of Deckerville, two sons, Tim (Cathy Williams) Leibinger of FL,Tom Leibinger of Jeddo,one daughter Connie (Dr. Marcus) Free of St. Joseph, four grandchildren and one great grandchild, one sister, Mrs. Marlene (Richard) Kaumeir of Port Huron, and several nieces and nephews. A funeral mass to celebrate the life of Frederick P. Leibinger will be held at 11:00 AM. Monday in St. Joseph Catholic Church, Good Shepherd Parish, Argyle. Fr. Charles Hammon will officiate. Burial will be in Downing Cemetery. Visitation will be from 2:00-8:00 PM., Sunday in the Apsey Funeral Home, and from 10:00 AM-11:00 Am., Monday In the church. K of C Rosary will be recited at 7:00 PM., Sunday Memorials may be given to Multiple Scleroses Foundation, msfocus.ord Condolences may be sent on line to apseyfuneralhome.net

The family of Frederick P. Leibinger created this Life Tributes page to make it easy to share your memories.

Send flowers to the Leibinger family.