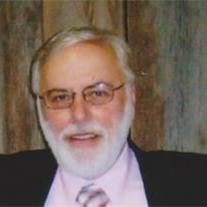 Gary F. Trigger, age 65, of Carsonville, died Monday January 21, 2013 in Port Huron Hospital. He was born August 18, 1947 in Sandusky, the son of the late Walter and Mary (O'Rourke) Trigger. He married Sandra Kay Brazaski on June 23, 1990 in Willow Grove, PA. She preceded him in death on October 15, 2010. He then married Vicki Teague-Inman on October 9, 2011 in Celina, OH. Gary retired from the US Navy as an aircraft electrician. He was a member of the Black River Blue Grass Boys Band. He enjoyed flying remote control airplanes, NASCAR, and Traveling. He was a former Boy Scout Leader, a student pilot, and a member of the American Legion. He also was active in the Relay for Life. He was an active member of Mills Road Gospel Hall. Gary is survived by his wife Vicki, of Carsonville, one son, Kevin W. Trigger, two daughters, Pam Goeddey and Shannon Evans, both of MO.,two stepsons, R. Chad Inman of OH., T. Clay Inman of GA., three step daughters, Melissa Shroyer of OH., Megan Kearns of OH., and Monica Overbey of OH., two sisters, Sharon Isom of Sandusky, and Darlene Lyons of Roscommon, nine grandchildren, and 17 step grandchildren, one niece Justine Benford of Fenton, and one nephew George McGinnis of Sandusky. He was preceded in death by one daughter Kelley Trigger. Funeral services to celebrate the life of Gary F. Trigger will be 2:00 PM., Saturday in the Apsey Funeral Home. Elder Barry Brinker will officiate. Burial will be in Downing Cemetery. Visitation will be 2:00-9:00 PM., Friday and from Noon until the time of service on Saturday. Memorials may be given to the family discretionary fund. Condolences can be sent to http://apseyfuneralhome.net/

The family of Gary Trigger created this Life Tributes page to make it easy to share your memories.

Send flowers to the Trigger family.