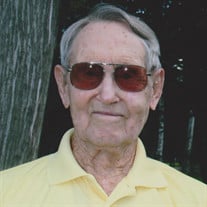 Gerald Pohl, age 96, of Palms, Michigan, passed away peacefully on Thursday, December 17, in Winter Haven, Florida, following a brief illness. He was born on October 31, 1919, in the farmhouse where he grew up, one of five children of the late Arthur and Elsie Pohl of Palms. Gerald married Elizabeth (Betty) Neukamm on June 14, 1947, in Detroit, Michigan. The couple made their home on the Pohl farmstead on Snay Road. For the last 31 years, Gerald and Betty enjoyed spending the winters in Winter Haven, Florida. Gerald was a dairy farmer his entire life. When he wasn't working the farm, he was actively involved at Trinity Lutheran Church in Forestville, Michigan, where he served as usher and trustee for many years. Gerald loved bowling, baseball, hunting, shufflleboard, golf, and especially playing--and winning!--at cards. In addition to his wife Betty, Gerald is survived by his youngest sister, Gladys Flood, of Sterling Heights, Michigan. Other survivors include five children: Gary (Sue) of Hurdle Mills, North Carolina; Kathy (Bruce) of Sussex, Wisconsin; Laurie Todd, Columbus, Mississippi; Glenn, Palms, Michigan; and Jim (fiancee Dawn), Palms, Michigan. Also surviving are 6 grandchildren and 4 great-grandchildren, as well as numerous loving nieces and nephews. Preceding Gerald in death were his 3 siblings--brother Ed, and sisters Helen and Betty. A memorial service to celebrate the life of Gerald Pohl will be held 11:00 AM. Friday in Trinity Lutheran Church, Forestville. Pastor Richard Wilson will officiate. Burial will be in the church cemetery. Visitation will be from 10:00 am., until the time of the service. . Memorials are suggested to: Snay Cemetery C/O Jim Pohl 4370 Snay Rd. Palms, MI. 48465 Arrangements are by the Apsey Funeral Home. Condolences may be sent on line to apseyfuneralhome.net

Gerald Pohl, age 96, of Palms, Michigan, passed away peacefully on Thursday, December 17, in Winter Haven, Florida, following a brief illness. He was born on October 31, 1919, in the farmhouse where he grew up, one of five children of the late... View Obituary & Service Information

The family of Gerald A. Pohl created this Life Tributes page to make it easy to share your memories.