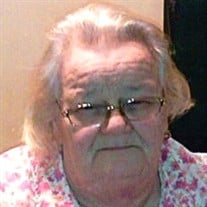 Gladys L. Badgley, age 72, of Deckerville, passed away Tuesday January 31, 2017 in Covenant-Cooper Hospital, Saginaw. She was born December 14, 1944 in Lake City, MI. the daughter of the late Victor and Leona (Gurnell) Snyder. She married Willet Badgley on June 4, 1972 in Mio, MI. Gladys was a cook at Mary’s Diner in Port Sanilac for 28 years. She enjoyed cooking, clipping coupons, and shopping. Gladys is survived by her husband Willet of Deckerville, three daughters, Lori Scribner of Mikado, Bobbie Nash of Sandusky, and Rose Nash of Deckerville, two step-sons, Robert Badgley of ND., William Badgley of Argyle, and one step-daughter Ella Waun of Snover, twelve grandchildren and eight great grandchildren, four sisters, Vicky Tooms of Sandusky, Genevieve Clambert of Harrisville, Bonnie Clark of Lincoln, and Freda Newcomb of Sandusky, and several nieces and nephews. She was preceded in death by one daughter Leona Nash in 2009 and one brother William Banks. Funeral services to honor the life of Glady L. Badgley will be 2:00 PM., Sunday in the Apsey Funeral Home. Pastor Samuel Combs will officiate. Cremation will follow at May Memorial Crematory. Visitation will be from 4:00 PM to 8:00 PM Saturday and from 1:00 PM Sunday until the time of Service. Memorials may be given to the family discretionary fund. Condolences may be made on line at apseyfuneralhome.net

The family of Gladys L. Badgley created this Life Tributes page to make it easy to share your memories.

Send flowers to the Badgley family.