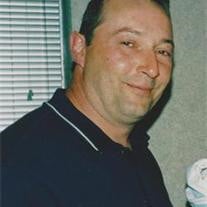 Glen J. Schumacher, age 50, of Deckerville, died unexpectedly Monday June 18, 2012. He was born December 26, 1961 in Deckerville, the son of the late Elmer and Clara (Shobert) Schumacher. He married Dorene Peruski on October 26, 1979 in St. Patricks Church, Palms. Glen owned and operated Westend Collision in Deckerville. He enjoyed hunting and spending time with his family and grandchildren. He attended St. Patrick's Catholic Church for many years. Glen is survived by his wife Dorene of Deckerville, two sons Cory (Majel) Schumacher of Deckerville, Jason (Amanda) Schumacher of Kinde, three grandchildren Ellana, Kallie, and Vincent, one brother Phillip (Sharon) Schumacher of Applegate, three sisters, Ms. Janet (Carl) Schumacher of St. Clair Shores, Ms. Jackie Partaka of Sandusky, and Mrs. Jill (Gordon) Scott of Sandusky, several nieces and nephews and his mother-in-law Mrs. Marlene Peruski of Palms. He was preceded in death by his parents Elmer and Clara Schumacher, one sister Joan Grifka and his father-in-law Eugene Vincent Peruski. A funeral mass to celebrate the life of Glen J. Schumacher will be 11:00 AM., Thursday in St. Patricks Catholic Church, Palms. Burial will be in Downing Cemetery. Visitation will be from 2-9 PM., Wednesday in the Apsey Funeral Home, and from 10:00 AM., until the time of service at St. Patrick's Catholic Church. Memorials may be given to the Downing Cemetery or the Family Discretionary Fund.

The family of Glen Schumacher created this Life Tributes page to make it easy to share your memories.

Send flowers to the Schumacher family.