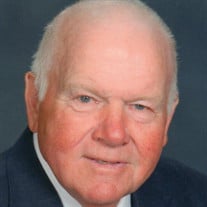 Harleigh T. Pattullo, age 84, of Deckerville, passed away Sunday April 26, 2020, in Autumnwod of Deckerville. He was born December 9, 1935 in Deckerville, the son of the late Harold and Mable (Decker) Pattullo. He married Janet Saunders on February 2, 1957 in Mayville. Harleigh sold his Deckerville farm in the early 1970’s and moved to Northern Michigan. He found employment in sales and real-estate, with time also available to run his small hobby farm. He retired back to Deckerville in 2007. Besides spending time with his family, grandchildren, friends and his animals; Harleigh also enjoyed fishing, hunting, sports and Eagle football . Harleigh was also active in Gideons International for 40 plus years, as well as serving in his local church. He is survived by his wife Janet Pattullo of Deckerville; his children, Brad (Jo Ann) Pattullo of Milton, FL, Patti (Kelly) Pattullo-Sailor of Jackson, Mark (Deb) Pattullo of Mio, Steve (Kelli) Pattullo of Kalamazoo, and Dan (Trina) Pattullo of Val Dosta, GA; sixteen grandchildren and 8.5 great grandchildren; one sister Mrs. Sharon (Murray) Metcalf of OH; two brothers Robert (Sue) Pattullo of Deckerville and Roger (Mary) Pattullo of FL; sister-in-law Gerry (Dale) Person of Pt. Sanilac and several nieces and nephews. He was preceded in death by his parents and four sisters, Doris Twiss, Jean Twiss, Mayme Decker and Marion Pattullo. A public graveside service will be held on Saturday May 2, 2020 in the Downing Cemetery at 2:00 PM. Elder Kelly Sailor and Pastor Dan Packer will officiate. Visitation will be from 1:00pm until the time of service. Memorials may be given to the Deckerville Bible Church or Gideons International PO Box 123 Sandusky, MI. 48427 Condolences may be sent on-line to apseyfuneralhome.net

Harleigh T. Pattullo, age 84, of Deckerville, passed away Sunday April 26, 2020, in Autumnwod of Deckerville. He was born December 9, 1935 in Deckerville, the son of the late Harold and Mable (Decker) Pattullo. He married Janet Saunders... View Obituary & Service Information

The family of Harleigh T. Pattullo created this Life Tributes page to make it easy to share your memories.

Send flowers to the Pattullo family.