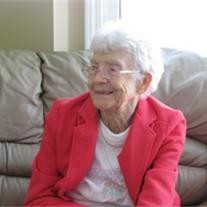 Ida (Merriman) Wagner died Saturday April 11, 2009 at American House in Livonia. She was born October 17, 1915 in Deckerville, Michigan, the daughter of the late Oscar and Amy (Fair) Merriman She married Earle Glenn Wagner on July 19, 1937. He preceded her in death on December 12,1997. She was a librarian at U of D in Detroit until moving to North Branch in 1972 where she was secretary for the North Branch Schools until retirement. She was a member of the First United Methodist Church of North Branch. She loved to volunteer at the Mayville Historical Society, and the Thrift shops in Mayville and North Branch. She loved being outdoors on the farm tending to her flowers, fish and vegetable garden until moving to American House in Livonia. She is survived by only child William (Pamela) Wagner of Livonia, Michigan. Two granddaughters Amy (John) Savela and Nancy (Walter) Reiter. Five beautiful great grandchildren, Kaylina, Jase, Marley Jean, Mason and Rachel. One sister-in-law Margaret Merriman of Deckerville and several nieces and nephews. Ida was preceded in death by all her brothers and sisters, Harleigh, Joel, John, Richard, David, Frank, Willis, Dorothy Austin, Anne Thorne and Ruth Cloutier. Funeral Services to celebrate the life of Ida (Merriman) Wagner will be at noon Saturday May 16, 2009 in the Apsey Funeral Home, 3467 Main Street, Deckerville, MI 48427 phone 810-376-3574. Pastor Chris Wolf will officiate. Private burial in Downing Cemetery, Deckerville. Visitation will be from 11:00 am until the time of service. Condolences may be sent to apseyfuneralhome.com

The family of Ida Wagner created this Life Tributes page to make it easy to share your memories.

Send flowers to the Wagner family.