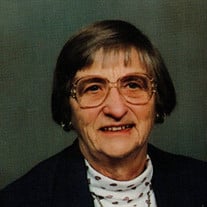 Ietta Elizabeth McLeod, 92, of Kokomo passed away Monday, June 12, 2017, at 11:02 A.M. at St Josephs Hospital. Born December 22, 1924, in Wheatland Township, Sanilac County, MI, she was the daughter of the late Angus and Thora (Puddock) McLeod. Ietta was a 1943 Deckerville H.S. graduate. She graduated from the Baptist Missionary Training School in Chicago, IL on June 19, 1950. She then served three-and-a half years as Dean of Women at the Barranquitas Baptist Academy in Puerto Rico. Beginning in 1954 Ietta taught in the Weekday Religious Education program in Kokomo for the National Council of Churches, until the program ended. Ietta joined the staff at Carver Community Center in 1969 and retired from there in 2008 as office manager after 38 years of service. Ietta remained active in her church, First Evangelical Presbyterian Church on W. Jefferson Street, serving as elder for six years. Since April, 2016, she made her home at North Woods Commons assisted living facility. In addition to her parents, she was preceded in death by her brothers, Angus and Gordon, and her sister, Sue (Ralph) McLeod Norton, all of Michigan. She is survived by five nieces and nephews and their children in Michigan, Pennsylvania, Tennessee, Illinois, Delaware, and Arizona. The funeral service will be conducted by Rev. Joyce Harris on Monday, June 19, 2017, at 1:00 P.M. at the First Evangelical Presbyterian Church, 2000 W. Jefferson Street, Kokomo, IN 46901. Friends may visit prior to the service from 11:00 A.M. to 1:00 P.M. A graveside service will be held at 11:00 A.M. on Wednesday, June 21, 2017, at Downing Cemetery in Deckerville, MI. In lieu of flowers, donations may be sent to the First Evangelical Presbyterian Church of Kokomo, or the Arthritis Foundation of America. Arrangements are by the Apsey Funeral Home. Condolences may be sent on line to apseyfuneralhome.net

The family of Ietta E. McLeod created this Life Tributes page to make it easy to share your memories.

Send flowers to the McLeod family.