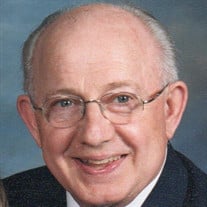 Dr. J. Frederick (Fred) Walton, age 83, of Deckerville, MI passed away on December 17, 2020 in Beaumont Hospital, Royal Oak. Fred was born in Evansville, Indiana on August 11, 1937 to the late Raymond and Marjorie (Kinney) Walton. He attended F.J. Reitz High School in Evansville where he was a leader excelling in track which culminated in being Cross Country Champion of Evansville. After graduation from Reitz in 1955 Fred attended Wayne State University in Detroit, for two years before entering Purdue University where he graduated from the School of Veterinary Medicine in 1964. He was proud to say that he was in the 2nd graduating class of the Veterinary School of Medicine at Purdue. Upon graduating from Purdue, Fred joined Arnold Hentchel’s veterinary clinic in Harbor Beach. He later moved to Deckerville, and joined the Deckerville Veterinary Clinic (specializing in large animals) where he was a partner until his retirement. During his career, he was president of the Michigan Veterinary Medical Association, writing a variety of articles for their professional publications. Upon retiring from the Deckerville Clinic, Fred joined the Sanilac County Humane Society for a number of years. He was a member and volunteer for the Deckerville Historical Society and a member of the Deckerville United Methodist Church where he served as treasurer. Fred is survived by his wife of 22 years, Carol, his children; Charles Fredrick Walton of Washington DC and daughter Jamie Prather (Jesse) of Topeka, Kansas. Stepdaughters; Michelle Noonan of Woodstock, Ga, and Melinda Kirby of Alpharetta, Ga. He is also survived by sisters Susan Tyler (Bill), Owensboro, KY and Sharlot White (David) of Evansville, Indiana. Grandchildren Charles Walton, Charlotte Armstrong and Christian Walton all of Chesapeake, VA, Kendall and Calvin Prather of Topeka, Kansas. Step grandchildren: Matthew and Amanda Noonan, Alpharetta, Ga and Erin and Tiemann Kirby, Woodstock, Ga. One great grandson, Cash Armstrong. He was preceded in death by his parents and first wife, Betty Warner Walton. A memorial service will be held at a later date. Memorial remembrances may be made to the Sanilac County Humane Society, PO Box 27, Carsonville, MI 48419 or Western Kentucky Botanical Garden, 25 Carter Rd., Owensboro, Kentucky 42301 Condolences may be sent on-line to apseyfuneralhome.net

The family of J. Frederick Walton created this Life Tributes page to make it easy to share your memories.

Send flowers to the Walton family.