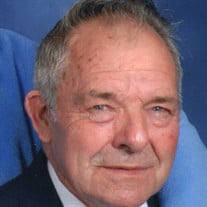 Jack Schubel, 86, life- long resident of Minden City, Michigan died at his home on March 2 with his family by his side. Besides being a farmer, Jack owned a farm implement business for many years, and was respected in the local community as the man to turn to when something badly broken needed to be fixed. Jack attended the Linwood School through the eighth grade, and after attending high school in Minden City for one year, graduated from Harbor Beach High School in 1952. He married his high school sweetheart, Judy Lautner, in the Unity United Church of Christ in Forestville on February 20, 1960. Jack lost Judy to cancer on March 3, 1992. He was blessed to find another love in Elizabeth (Betty) Gallarno who has been by his side for the past 27 years. Jack served his country in the US Army for 6 years. Much of his service was at Fort Hood, Texas where the military appreciated his particular genius for keeping large tanks and other army vehicles running and in service. Jack was a loyal and ardent member of the Masonic order. He belonged to Marion Lodge # 392 of Deckerville, the Order of the Eastern Star #27 of Sandusky and the Chapter, Royal Arch and Knights Templar #52 of Bad Axe. He was also particularly fond of Barber Shop Quartette music and sang with a local quartette group and in several church choirs. He was a member of the Methodist church of Minden City. Jack is survived by his wife, Betty, his children, Cheryl, of East Lansing, Michigan; Darrel (Julie) of Roseville, Michigan; step- children, Donna (Paul) Pereira of Birmingham, Michigan; Joe (Mary Joe) Paruch of Berkley, Michigan and a sister, Jean (Jim) McClung of Chicago, Illinois. He was preceded in death by his parents, Ted and Ella (Popp) Schubel, a sister, Joan (Jack) Potts and a brother, Jim (Linda Hamill). Because of COVID concerns, a memorial service will be celebrated at a later date. Memorials in Jack’s name can be directed to Heartland Hospice, 1171 South Van Dyke, Bad Axe, Michigan 48413 which provided such extraordinary care for Jack and his family in his last days. Condolences may be sent on line to apseyfuneralhome.net

Jack Schubel, 86, life- long resident of Minden City, Michigan died at his home on March 2 with his family by his side. Besides being a farmer, Jack owned a farm implement business for many years, and was respected in the local community... View Obituary & Service Information

The family of Jack E. Schubel created this Life Tributes page to make it easy to share your memories.

Send flowers to the Schubel family.