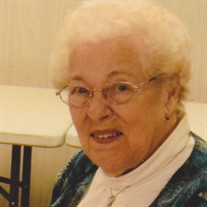 Jacquetta Ann Williamson, 79, of Deckerville, MI died at home, surrounded by her family on July 28, 2015 after a short battle with cancer. Jackie was born on April 11, 1936 in Carsonville to Daniel and Eva Lawler. She graduated from Carsonville High School in 1953 and married Garth Williamson on April 16, 1955 at the Methodist Church in Deckerville. Jackie worked 38 years at the Deckerville IGA. In addition to her career, Jackie was accomplished at quilting and her grandchildren and great-grandchildren will cherish their quilts they have received over the years. Jackie was also proud of her Irish heritage. One of her most cherished memories was a wonderful trip to Ireland with family and friends and she worked at a local Irish store after retiring from the IGA. She proudly displayed her Irish teapots, cups and blankets and you could always find a cold bottle of whiskey in her freezer. Jackie is survived by her husband, Garth Byron Williamson, her children, Lynnette (John) Tanton of Deckerville, Cheryl (Pat) Lindke of Deckerville, and Doug (Betty) Williamson of Sandusky; her seven grandchildren, Travis and Timmy Tanton, Kristin (Tommy) Bezemek, Laci (Billy) Fisher, Justin (Nicole) Lindke, Joshua Williamson and Jason Williamson (Autumn Wake) and her five great-grandchildren, Oliver Bezemek, Liam and Reaghan Fisher, Brody Lindke and Meadow Williamson. She is also survived by a half-sister Sharon (Carl) Holstein along with brother and sister-in-laws, Keith and Donna Williamson, Jane Maier, George and Joyce Raymer and Bill and Jan Kritzman; and close family friends from Denmark, Mikael Christensen and Annette, along with several nieces, nephews, cousins and special friends. She is preceded in death by her son Daniel, her granddaughter Jennifer Williamson, her parents, Daniel and Eva Lawler, her step-mother Mary Lawler, her sister and brother-in-law Donna and Dave McAfee and her and Garth’s beloved dog, Molly. A funeral is scheduled for Friday at 11:00 a.m. at Apsey’s Funeral Home, with a dinner to follow at the Deckerville Community School. Burial will be at Washington Cemetery, Carsonville, MI. Pallbearers will be her 7 grandsons and her nephew, Robbie McAfee. Visitation will be at Apsey’s Funeral Home Thursday from 2-8 pm. Pastor Mark Garavaglia will officiate the ceremony. In lieu of flowers, memorials may be made to United Hospice of Marlette or the First Presbyterian Church of Deckerville. Condolences may be sent on line to apseyfuneralhome.net

Jacquetta Ann Williamson, 79, of Deckerville, MI died at home, surrounded by her family on July 28, 2015 after a short battle with cancer. Jackie was born on April 11, 1936 in Carsonville to Daniel and Eva Lawler. She graduated from Carsonville... View Obituary & Service Information

The family of Jacquetta A. Williamson created this Life Tributes page to make it easy to share your memories.

Send flowers to the Williamson family.