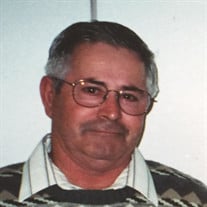 James R. Varosi, age 71, of Deckerville, passed away peacefully Friday Feb. 26, 2016 in his home. He was born July 17, 1944 the son of the late Steve and Mary (Keller) Varosi. He married Miss. Sharon Belger on July 18, 1964 in St. Joseph’s Catholic Church, Argyle. Jim was a graduate of Deckerville Community School, class of 1962. He was an area dairy farmer until his retirement when he and his wife moved to Deckerville and opened the D’ville Diner on Main Street. He enjoyed playing softball, fishing, bowling, and driving his Corvette in the Homecoming parade. Jim was a member of the Knights of Columbus, and the Deckerville Athletic Boosters. He is survived by his wife Sharon of Deckerville, three daughters, Karen (Darryl) Heath of Australia, Ruthann Varosi (Brian Thorsen) of Lexington, and Susan (Gary) Cesefske of Deckerville, eight grandchildren, Kurtis Van Alstine, Gara Cesefske, Phil Essenmacher, Emily Cesefske, Jenna Varosi-Garavaglia, Lauren Varosi-Garavaglia, Jacob Varosi and Jaxen Heath, also two brothers and one sister,Steve, Bill and Rosemary. He will be sorely missed by his family, friends and the coffee guys at the D’ville Diner. A Funeral Mass to honor the life of James R. Varosi will held 11:00 AM., Saturday March 5, 2016 at St. Patrick’s Catholic Church, Palms, MI. Fr. Todd Arnberg will officiate. Burial will be in the Downing Cemetery. Visitation will be 2:00-8:00 PM., Friday March 4, 2016 in the Apsey Funeral Home and 10:00 AM., until the time of Mass at church. Memorials may be made to the Downing Cemetery Fund or the Deckerville Education Foundation. Condolences may be sent on line to apseyfuneralhome.net

The family of James R. Varosi created this Life Tributes page to make it easy to share your memories.

Send flowers to the Varosi family.