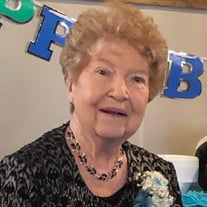 Jeanette A. (Morell) Kursinsky, age 87, of Palms Michigan passed away on December 7, 2021 in Midland MI at Brittany Manor Nursing Home. She was born on Halloween October 31, 1934, in Cass City, MI and was immediately adopted by the late Wilford and Catherine (Grimski) Morell. Jeanette grew up in Argyle and Ubly. She graduated with honors in 1953 from Ubly High School. On May 22, 1954, she married Clifford H. Kursinsky in Argyle and they lived for almost 60 years in the little village of Palms, MI where they raised 4 children. He preceded her in death on May 10, 2018. Jeanette worked for two years in the Deckerville Community Schools cafeteria before becoming the head librarian at the Deckerville Public Library, a job she held for 30 years and was very proud of. While there she was the driving force behind modernizing and expanding the library. She was also active in the St. Patrick’s Catholic Church choir in Palms, was a Girl Scout Leader and was a founding member of the Deckerville Hospital Auxiliary and, a member of the Deckerville Band Boosters for fourteen years. After her retirement, Jeanette and Cliff traveled extensively throughout the US, and also western Europe. Jeanette was blessed with artistic ability and expressed her creativity in many ways including sewing, quilting, crafting and especially painting. She created an extensive portfolio of paintings and decorative items for her family and for sale. She also loved her flower gardens and enjoyed the outdoors, birds, nature and her kitties. She is survived by her four children: Randall of Midland MI, Debra (Bill Burgess) of Deckerville MI, Richard (Melanie Anderson) of Oakland Twp. MI and Daniel (Kelly) of Phenix City AL along with six grandchildren: Jason Burgess (Rachel Umlor) of Conklin, and Christopher Burgess (Michelle Apsey) of Deckerville, Justin Kursinsky of Atlanta, GA, Tara Kursinsky of Edinburgh, Scotland, Jordan Kursinsky of Phenix City, AL., and Andrew Kursinsky (Lydia) of Columbus, GA, two great-grandchildren: Levi and Rosalie Burgess and half-sister Maureen Feely of Owosso MI. She was preceded in death by infant son David on June 2, 1955 and her stepfather John Palmer. Jeanette was greatly loved by all who knew her and will be missed immensely. A Memorial visitation will be held Saturday June 25, 2022 from 11:00-Noon in the Apsey Funeral Home. Memorials may be made to Deckerville Community Hospital Auxiliary, Deckerville Community Library or St. Patrick’s Catholic Church. Condolences may be sent on-line to apseyfuneralhome.net

Jeanette A. (Morell) Kursinsky, age 87, of Palms Michigan passed away on December 7, 2021 in Midland MI at Brittany Manor Nursing Home. She was born on Halloween October 31, 1934, in Cass City, MI and was immediately adopted by the late Wilford... View Obituary & Service Information

The family of Jeanette A. Kursinsky created this Life Tributes page to make it easy to share your memories.

Send flowers to the Kursinsky family.