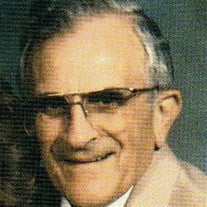 John Lauro Jr., age 93 of Deckerville went home to be with the Lord June 7, 2018 in the Sanilac Medical Care Facility. He was born Oct. 24, 1924 in Philadelphia, PA to the late John and Leah Lauro. He married Joyce (Terpenning) Hale June 3, 1973 in 1st Baptist Church of Deckerville on Joyce’s parents 42nd anniversary. Her parents were their attendants. John attended Mastbaum Vocational School, as well as Spring Garden Institute in Philadelphia. He enlisted in the Army when he was 18, and was assigned to Co. C. 1st Battalion, 387th Infantry Unit, 97th Division. In 1944, he was transferred to Headquarters Company I, 120th Infantry Regiment, 30th Infantry Division to be a messenger. He went across Omaha Beach in Normandy after D-Day, and earned a bronze star for meritorious achievement, as well as a Purple Heart when he was wounded in the Battle of Mortain. His unit was awarded the Presidential Unit Citation for their stand against the Germans at Mortain. He spent over six months in an Army Hospital outside of London, England, then was sent back to the States. He worked as an instrument technician for Tank Automotive Research and Development Command in Warren, MI for over 35 years, traveling with the Land Locomotion Group to many states and foreign countries. John is survived by his wife, Joyce Lauro; a son, John Stephan (Vicki) Lauro; a step-grandson, Brian (Jen) McGlynn; brother-in-law, William (Sis) Gallagher; two nephews, Alan (Claire) Gallagher and Robert (Linda) Gallagher; one niece, Kim (John) Clark. He was preceded in death by his parents, and three sisters, Irene Lauro, Thelma Lauro, and Delores Gallagher. John was a life member of the D.A.V. and attended the Port Sanilac Baptist Church. Funeral services for John Lauro will be 11:00 AM., Monday in the Apsey Funeral Home. Pastor Paul Slivka will officiate. Burial will be in the Downing Cemetery. Visitation will be from 2:00 PM., until 8:00 PM., on Sunday and from 10:00 AM until the time of service on Monday. Memorials may be given to the 1st Baptist Church of Pt. Sanilac or to the donor’s choice. Condolences may be sent on-line to apseyfuneralhome.net

John Lauro Jr., age 93 of Deckerville went home to be with the Lord June 7, 2018 in the Sanilac Medical Care Facility. He was born Oct. 24, 1924 in Philadelphia, PA to the late John and Leah Lauro. He married Joyce (Terpenning) Hale June... View Obituary & Service Information

The family of John Lauro Jr. created this Life Tributes page to make it easy to share your memories.

John Lauro Jr., age 93 of Deckerville went home to be with the...

Send flowers to the Lauro family.