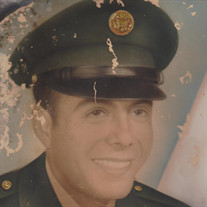 Jose’ (Poncho) Villafranca age 72, of Deckerville, died Thursday June 25, 2015 in the home of his son. He was born March 29, 1943 in Laredo, TX, the son of the late Miguel and Petra (Castillo) Villafranca. He married Oralia O. Oviedo on March 22, 1967 in Laredo, TX, she preceded in death on July 31, 2002. Poncho was a US Army Viet Nam veteran. He worked as a truck driver and laborer for the Keinath family for over twenty years on the farm and at the Auto Repair. He is survived by three sons, Jose’ A. (Kelly) Villafranca Jr. of Parisville, Mario Villafranca of Brown City, and Orlando (Ashley) Villafranca of Deckerville, eight grandchildren, Kristen, Marisa, Aliana, Selena, Christopher, Adrienne, Anthony, Adien, four brothers Romeo, Pedro, Ruben, and Matias, two sisters, Lupe Villafranca and Juana Obregon all of TX., and several nieces and nephews. He was preceded in death by two brothers, Miguel, and Mauro, and one sister Lilia. A Memorial Service will be held at Apsey Funeral Home on Sunday July 26, 2015 at 3:00 PM to honor the life of Jose’ (Poncho) Villafranca. Pastor David Barnes will officiate. Burial of his cremains will be in Great Lakes National Cemetery. Visitation will be from 1:00 PM until the time of service in the Apsey Funeral Home. Condolences may be sent on line to apseyfuneralhome.met

The family of Jose' A. Villafranca created this Life Tributes page to make it easy to share your memories.

Send flowers to the Villafranca family.