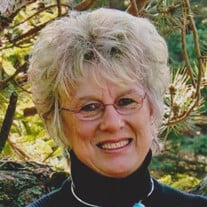 Joyce M. Block, age 74, of Minden City, passed away peacefully at her home with her family by her side on Tuesday October 28, 2014. She was born September 20, 1940 in Minden City, daughter of the late Raymond and Florence (Ertman) Bismack. She married Melvin Block on October 15, 1960 and had been happily married for 54 years. Joyce began her 58 year career as a Medical Assistant at the age of 14 for Dr. Albert Lambert at the Minden City Clinic. Over the years, she worked for numerous doctors in Minden City and in Deckerville including Dr. James Reuter, Dr. Levi Guerrero, and the Deckerville Hospital retiring in 2012. Her and Melvin lived on the family farm and also owned and operated M&J Carriers for 44 years. She enjoyed bowling for Stomack Angels for many years, spending time with family and friends which usually included playing euchre or poker, she also enjoyed going to the casino and antique collecting with her husband. She is survived by her husband Melvin of Minden City, two sons, Terrance (Melissa) Block of Minden City and Steven (Michelle) Block of Virginia, and one daughter Colette (Dean) McConnachie of Deckerville, seven grandchildren, Teryan and Kaylee Block, John and Mitchell Block, and Kelsey, Kelly, and Karyn McConnachie, two brothers, Jerome (Theresa) Bismack of White Lake and Jay (Dyanna) Bismack of Minden City, one sister, Janice Bismack of Minden City, two sister-in-laws, Cathy Bismack of Waterford and Terri Block of Minden City, brother and sister-in-laws, Dallas Block of Virginia and Ed and Marie Ploe of Grosse Pointe Park, and many nieces, nephews, cousins, and friends. She was preceded in death by one brother, James Bismack. Brother and sister-in-laws, Larry Block, Elmer Block, and Joe and Arlene Gazdick. A Memorial Mass to honor the life of Joyce M. Block will be Sunday November 2, 2014 at 3:00 PM in St. Patrick’s Catholic Church, St. Isidore Parish, Palms. Fr. Todd Arnberg will officiate. Visitation will be from Noon until 3:00 PM at the church. Memorials: United Hospice of Marlette or Minden City Lions Club. Condolences may be sent on line to apseyfuneralhome.net

Joyce M. Block, age 74, of Minden City, passed away peacefully at her home with her family by her side on Tuesday October 28, 2014. She was born September 20, 1940 in Minden City, daughter of the late Raymond and Florence (Ertman) Bismack. She... View Obituary & Service Information

The family of Joyce M. Block created this Life Tributes page to make it easy to share your memories.

Send flowers to the Block family.