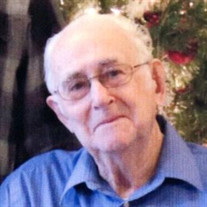 Keith K. Williamson, Deckerville, Michigan Age 93 passed away July 8th, 2019 in Deckerville Michigan. He was born March 13, 1926 in (Berkshire) Sandusky, Michigan to the late Byron and Mildred (Kenny) Williamson. Keith graduated from Deckerville High School in 1945. He married Donna P. VanSickle on September 7, 1946 in the Deckerville United Methodist Church. They were married 71 years. Keith and Donna owned Keith Williamson Dairy Farm, worked side by side and raised their family of 4 children. Along with working on the family farm, Keith drove school bus for Deckerville Community School and worked at Yale Rubber in Sandusky, Michigan. After his retirement Keith was always there to lend a hand to his sons, who took over the farm, anytime help was needed. He was a 35-year member of the Michigan Milk Producers and received a Lifetime Achievement Award from the Dairy Herd Improvement Association. He served on the Deckerville School Board, Board of Review, and many other community organizations. Keith was an honorary member and one of the founders of the Deckerville Sportsman’s Club and was an avid turkey, pheasant, and deer hunter. He was a league bowler and enjoyed a good game of Euchre with family and friends. Keith is survived by his children, Duane (Vicky) Williamson, Queen Valley, AZ, Audrey Kerbyson (Mark), Palms, MI, Daryl (Melanie) Williamson, Kingston, MI, Bonnie (Tracy) Hoff, Deckerville, MI, Sisters, Joyce Raymer, Jeanette Kritzman, Brother, Garth Williamson, Sister-in-law, Judy VanSickle, 8 grandchildren, 12 great grandchildren, and 2 great-great grandchildren. Keith is preceded in death by his wife Donna, Brothers and sisters-in-law Edsel (Fidela) Williamson, Raymond (Elsie) Williamson, Brother in law and sister in law, Leslie (Ruby) VanSickle, and brothers in- law William Kritzman, George Raymer, Edward Maier, and Donald VanSickle, Sisters in law Jackie Williamson, son-in-law Edward Kerbyson, and grandsons Kevin and Charles Kerbyson. Funeral arrangements by the Apsey Funeral Home, Deckerville, Michigan, will be held at 11:00 AM Friday Rev. Robert Srock will officiate. Interment will be in the Downing Cemetery, Deckerville, Michigan. Visitation will be 3-8:00 PM Thursday and 10:00 AM Friday until the time of services. In lieu of flowers donations may be made to the Sanilac Sportsmen’s Club or the Deckerville First Presbyterian Church. Condolences may be sent on-line to apseyfuneralhome.net

The family of Keith K. Williamson created this Life Tributes page to make it easy to share your memories.

Send flowers to the Williamson family.