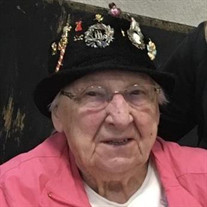 Lillian Lydia Russell, age 94, of Minden City, Michigan, passed away October 25, 2018 at Banner University Hospital in Tucson, AZ of Congestive Heart Failure. She was born on March 02, 1924 to the late Lydia (Killian-Weiss) and Lloyd Wolfe Sr. She married Theodore (Ted) Russell on June 17, 1949 in Ecorse, Michigan; he preceded her in death on March 21, 1972. Lillian is survived by her daughters, Martha (Dale) Fischer of Tucson, AZ; and Helen Wright of Gladwin, MI; grandchildren, Thomas (Kari) Creguer of Mt. Pleasant, MI; Tracy (Katie) Creguer of Carsonville, MI; Melanie (Phil) Mosure-Heller of Bay City, MI; Russell (Kristan) Mosure of St. Clair Shores, MI; and Dana (Scott) Mosure-Judge of Lake Orion, MI; Many great-grandchildren, nieces, nephews, cousins and special friends. She was preceded in death by her mother, Lydia Weiss; father, Lloyd Wolfe Sr.; brother, Lloyd Wolfe Jr.; stepson, Theodore Russell Jr. and grandson, TR (Theodore Russell); half-sister, Irene Horne; half-brothers, Lenny Weiss and Fredrick James Weiss; sister-in-law, Sophie Tessier; brother-in-laws, Adolph, Stanley, and Peter Russell and sister-in-laws, Josephine Cardolla and Nell Reczinski. Lillian lived an extraordinary life. She led by example, opening doors for women along the way. She ran a farm in Palms, MI, often single-handedly while her husband worked at the Ford River Rouge plant. She worked as a firefighter for Delaware Twp Fire Dept. She was involved with both Deckerville and Harbor Beach School Districts, including Deckerville’s board of education. She drove school bus, worked as a custodian and, most recently, worked until she was 91 at the Forestville Post Office. She was a woman who wore many hats both figuratively and literally. She showed courage throughout her life, even after bravely moving to Arizona her last couple years of life, she always kept busy with her “jobs” around the house and kept in touch with her Michigan family through texting and Facebook. She always said, “If you keep doing things you will never grow old; when you stop doing things, then you grow old.” She was a direct and positive influence in her grandchildren’s lives. Most of all she was a woman who had great faith in God and raised her family in the church. She most certainly is in heaven. Always thinking of others and how she can leave the world a better place, Lillian donated her body to Science so they can learn “Why she lived so long and to help others.” Memorial services will be held at Trinity Lutheran Church, Forestville, on Saturday May 18th at 1pm. Memorial contributions may be made to Delaware Fire Department, Minden City, MI; Trinity Lutheran Church, Minden City, MI; or Mt. Zion Lutheran Church, Tucson, AZ.

The family of Lillian L. Russell created this Life Tributes page to make it easy to share your memories.