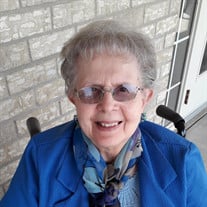 Lois E. Morden passed away on December 10, 2020, just six days after her 95th birthday, from complications due to COVID 19. She was born in Chicago, IL on December 4, 1925. After graduating from high school, she attended the Moody Bible Institute in Chicago, as she had dedicated her life to Christian ministry. It was there that she met her future husband, George Hubert Morden. They were married on August 5, 1950. In 1959 they, along with their two young children, Marilee and Glyn, went to Brazil as Conservative Baptist Missionaries, where they worked side by side in church planting and teaching in a Baptist seminary, training young people for Christian ministry. Upon retiring from the foreign mission field, they returned to the US and went to Fall River, MA, where they began a church for Portuguese-speaking people and Hubert served as pastor for an English-speaking congregation as well. Lois conducted both the Portuguese-speaking and English-speaking choirs, as well as a handbell choir for the Portuguese church. Ill health led to Hubert retiring from church work, and since he was originally from Michigan, they moved to Stonegate Assisted Living in Sandusky, MI. He passed away in October of 2013. She continued living at Stonegate and brought joy and laughter to all who knew her there. Her smile and giving nature will be greatly missed. She is survived by her sister, Doris Jorden, daughter, Marilee Morden and son, Glyn Morden. There will be a small funeral service now at the Apsey Funeral Home in Deckerville, MI on Monday, December 28, 2020 at 1:00 PM, with the burial at Forester Cemetery immediately afterward. A memorial service will be held in April 2021, when Marilee returns to the US from the mission field in Brazil where she is currently serving. As an expression of sympathy, memorial donations may be made in her name to the Deckerville Bible Church, which was her home church for the last seven years. Condolences may be sent on-line to apseyfuneralhome.net

Lois E. Morden passed away on December 10, 2020, just six days after her 95th birthday, from complications due to COVID 19. She was born in Chicago, IL on December 4, 1925. After graduating from high school, she attended the Moody Bible Institute... View Obituary & Service Information

The family of Lois E. Morden created this Life Tributes page to make it easy to share your memories.

Send flowers to the Morden family.