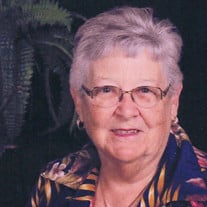 Madalyn Charlotte (Holin) Nichol age 93, formerly of Deckerville, died May 24, 2021 in Gulfside Hospice, Zephyrhills, FL. She was born in Baltimore, MD on June 17, 1927 the only child of William and Mary (Willumsen) Holin. Madalyn had a large extended family and many friends during her early years, but growing up in Baltimore led to a somewhat sheltered life. Although she never learned to ride a two wheeled bike, swim or drive while growing up in Baltimore, she did master driving years later after moving to the farm in Michigan. The first vehicle she ever drove was their large farm truck which she used to move the cattle around the farm. Madalyn was an avid reader which led to her finishing 3 grades of middle school in just two years. She attended and graduated from Eastern High School, a girl’s school, in 1944. While attending high school, she was hired to do clerical work at Holabird Signal Depot which set the stage for the career she had in her adult life. It was in her early years in high school that she and her friends were going to a movie and they spotted a group of young men in uniform across the street. They introduced themselves and she paired off with a young man named Wayne Nichol. Wayne shipped out to spend the rest of the war years in the Pacific theatre and upon returning to Baltimore became engaged to Madalyn. They were married on March 16, 1946 in Baltimore. Madalyn and Wayne moved to Michigan where they owned a family farm. After selling the farm, she became the bookkeeper for the family’s remodeling business. In 1957 she started working as the secretary for the Deckerville High School principal where she worked for the next 22 years before transferring to the superintendent’s office. Madalyn continued to work in the central office until retiring in 1988. After retirement Wayne and Madalyn began spending winters in Florida eventually buying a home in Zephyrhills. They liked the Valleydale Park so much that it became their permanent home. Madalyn busied herself in retirement with sewing, reading, knitting and volunteering with park functions like ice cream socials, picnics, and coffee hours. Madalyn and her husband raised two daughters, Kathleen (Brad) Root and Robin (Doug) Apsey in Deckerville and loved to spend time with family. She was extremely proud of her grandchildren Brian Root, Karen (Marc) Robertson, Christian (Andrea) Apsey and Erin Apsey, her great grandchildren Jessica Dinan, Nicholas and Benjamin Root, Dane Marasco, Matthew Corsetti, and Allison and Amelia Apsey as well as exchange students Hanne, Roula and Liliana. She loved to travel and she and Wayne traveled to Greece and Denmark to visit their exchange students. She was preceded in death by her parents and in 2017 by her loving husband of 71 years, Wayne. A memorial service to celebrate the life of Madalyn C. Nichol will be held on 1:00 PM Saturday, August 28, 2021 at the Apsey Funeral Home in Deckerville. Burial will be in Downing Cemetery.

Madalyn Charlotte (Holin) Nichol age 93, formerly of Deckerville, died May 24, 2021 in Gulfside Hospice, Zephyrhills, FL. She was born in Baltimore, MD on June 17, 1927 the only child of William and Mary (Willumsen) Holin. Madalyn had a large... View Obituary & Service Information

The family of Madge C. Nichol created this Life Tributes page to make it easy to share your memories.