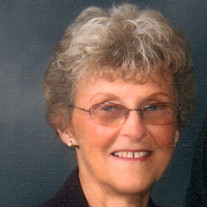 Margaret Williams, age 89, of Minden City passed away with family by her side on Wednesday, March 6, 2019 in Mesa, Arizona. She was born on September 14, 1929 in St. Johns, Michigan to the late Howard Rodney and Cecelia “Belle” (Harper) Love. Margaret Love married Malcolm Williams, while he was home on leave from the Army, on May 27, 1951 in St. Johns. Malcolm and Margaret moved to Minden City in 1956 to start their farm. Margaret worked on the farm and was a homemaker. She enjoyed being on the Sanilac County Board of Canvassers for 35 years and was an active member of the Gideons Auxiliary for 40 years. Music was also a very big part of her life. She was dedicated to playing the piano and organ at her Church for over 50 years. She also enjoyed being an active member of the United Methodist Women. Throughout her life she accompanied Malcolm to Haiti on 6 mission trips. Margaret loved being a mother to her two sons, Brian and Craig. Her five grandchildren were her pride and joy. Nothing made her more proud than to brag about her grandchildren. She was a loving wife, mother, one of the best grandmothers ever, and one of the most selfless people you’d know. Her life was one of service to God, Church, and her family. Margaret is survived by her husband of 67 years, Malcolm Williams; two sons, Brian Williams of Palms, Craig (Jeanne) Williams of Grand Ledge; five grandchildren, Christopher Williams of Royal Oak, Megan (Brent) Shaw of Snover, Castyn Williams (Fiancé Sam Brooks) of Howell, Carson Williams and Cole Williams of Grand Ledge, and one great grandchild on the way; two brother in laws, Howard (Eleanor) Williams, Myron (Maudy) Williams; numerous nieces and nephews. Margaret was preceded in death by her brother, Lloyd Love and sister, Beth Brewbaker. A Memorial Service to celebrate the life of Margaret Williams will be held at 11:00am Saturday, June 22, 2019 at McGregor United Methodist Church, Pastor Dale Barber will officiate. Visitation will be from 3:00pm to 8:00pm Friday, June 21, 2019 at Apsey Funeral Home and 10:00am until the time of the service on Saturday at McGregor United Methodist Church. Memorials may be given to The Gideons International www.gideons.org Condolences may be sent on-line to apseyfuneralhome.net

The family of Margaret Williams created this Life Tributes page to make it easy to share your memories.

Margaret Williams, age 89, of Minden City passed away with family...

Send flowers to the Williams family.