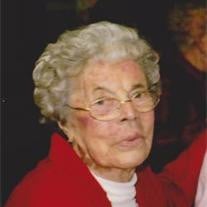 Mary Varosi, age 93, of Sandusky, died Saturday February 16, 2013 in McKenzie Memorial Hospital, Sandusky. She was born July 30, 1919 in Wheatland Township, the daughter of the late Nicholas and Mary (Matthews) Keller. Miss Mary Keller married Steve G. Varosi on March 30, 1940 in Argyle. He preceded in death on August 3, 1986. Mary was a member of St. Joseph Catholic Church, Argyle. She was a member of the Sandusky Dance Club. She enjoyed knitting, crocheting, puzzle books and her cats. She is survived by three sons and daughters-in-law, Steve (Betty) Varosi, William (Julie) Varosi all of Sandusky, and James (Sharon) Varosi of Deckerville, one daughter Ms. Rosemary Gornowicz of Davidson, 12 grandchildren, 13 great grandchildren, and 4 great grandchildren, one sister Mrs. Margaret Beno, and several nieces and nephews, and special friend Mike. She was preceded in death by one brother, Nicholas Keller, and two sisters, Josephine Quintus, and Helen Varosi, and special friend Mike. A funeral Mass to celebrate the life of Mary Varosi, will be 11:00 AM., Wednesday in St. Joseph Catholic Church, Argyle, Fr. Joseph Griffin will officiate. Burial will be in Downing Cemetery. Visitation will be 3:00-9:00 PM., Tuesday in the Apsey Funeral Home, and from 10:00 AM., until the time of service at church on Wednesday. Memorials may be given to St. Joseph Catholic Church. Condolences may be sent to http://apseyfuneralhome.net/

The family of Mary Varosi created this Life Tributes page to make it easy to share your memories.

Send flowers to the Varosi family.