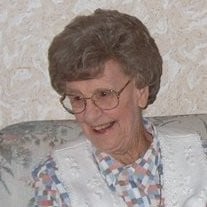 Mary Christina (Duncan) Wilkowski, age 102, of Deckerville, died Sunday May 12, 2013. She was born January 5, 1911 on a farm near Deckerville, the daughter of the late William and Clara (Burgett) Lamont. She married George Duncan on June 30, 1931, he preceded her in death on March 9, 1963. She then married Arthur Wilkowski on December 16, 1967, he preceded her in death April 19, 2005. Mary was a lifelong resident of the Deckerville area and a 1929 graduate of Deckerville High School. During her lifetime Mary worked at Feads Knitting Mill in Port Huron, in the offices of Dr’s Baird and O’Brian in Deckerville and at Yale Rubber Company in Sandusky. She was a loving mother, grandmother, and great grandmother and great great grandmother. She loved to play cards and was an active Golfer for many years. She especially enjoyed spending winters in Zephyrhills, Florida. She is survived by two sons, Wayne (Ruth) Duncan of Dearborn Heights, and Kenneth (Barbara) Duncan of St. Clair, six grandchildren, 13 great grandchildren, and seven great great grandchildren, and one sister Mrs. Thelma Smith of Deckerville, also several nieces and nephews. She was preceded in death by three brothers, Glenn Lamont, Ray Lamont, and Keith Lamont and one sister Mrs. Edith Schoenrock. Funeral services to celebrate the life of Mary (Duncan) Wilkowski will be 11:00 AM., Thursday in the Apsey Funeral Home, Pastor Mark Ordus will officiate. Burial will be in Downing Cemetery. Visitation will be 2:00-8:00 PM., Wed. and 10:00 AM., until the time of service on Thursday. Memorials may be given to United Hospice. Condolences may be sent to apseyfuneralhome.net

Mary Christina (Duncan) Wilkowski, age 102, of Deckerville, died Sunday May 12, 2013. She was born January 5, 1911 on a farm near Deckerville, the daughter of the late William and Clara (Burgett) Lamont. She married George Duncan on June 30,... View Obituary & Service Information

The family of Mary Duncan Wilkowski created this Life Tributes page to make it easy to share your memories.

Send flowers to the Wilkowski family.