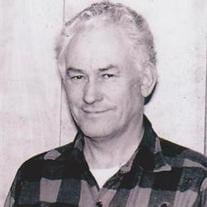 Reed E. Gough, age 81, of Deckerville died unexpectedly Friday September 21, in McKenzie Memorial Hospital. He was born March 22, 1931 in Deckerville, the son of the late Trayton Sr. and Agnes (Reid) Gough. He married Miss. Mary O'Mara on September 6, 1952 in Sandusky. She preceded in death on September 18, 1981. He then married Ms. Laura Van Natter on February 26, 1987 in Ontonagon. Reed was a life long area farmer. He enjoyed gardening, Tiger baseball, and playing pool. He was a former seasonal employee of Yale Rubber Co. He is survived by his wife Laura of Deckerville, two daughters, Mary Jo (Gary) Johnson of CO., Jo Ann (Dave) Hall of Croswell, one step-son Paul (Tina) Hardison and two step-daughters, Paula Hardison both of Nebraska, and Dayna (Dustin) Elliott of TX., one brother Trayton Gough Jr., of FL., and two sisters, Mrs. Lucy Scott of Howell and Mrs. Agnes (Don) Wallunas of West Bloomfield, and a daughter-in-law Brenda Gough of Deckerville. He was preceded in death by one son Reed Michael Gough in 2008., one great grandson Kevin Patrick Thompson, one brother John Gough and two sisters, Alma Jean Freiburger, and Geraldine Gough, and one son-in-law Kenneth Jones. Funeral services to celebrate the life of Reed E. Gough will be 11:00 AM., Tuesday September 25, in the Apsey Funeral Home. Rev. Robert Srock will officiate. Visitation will be 4:00-8:00 PM., Monday. Burial will be in Downing Cemetery. Memorials may be given to the family discretionary fund. Condolences may be sent to http://apseyfuneralhome.net/

The family of Reed Gough created this Life Tributes page to make it easy to share your memories.

Send flowers to the Gough family.