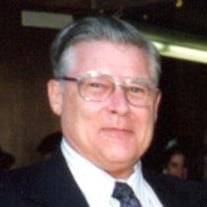 Dr. Robert Irving Cutcher, M.D. of Deckerville, our beloved brother, uncle, and friend passed away peacefully at his home on Thursday, August 1, 2019. He was 86 years old. Robert I. Cutcher was born on December 11, 1932 in Trafford, Pennsylvania to the late Edward Irving and Alma Leone (Campbell) Cutcher. He spent his younger years in Trafford and in Detroit until 1944 when his parents moved to Capac to the family farm. In 1950 Dr. Cutcher graduated Valedictorian from Capac High School, and then earned a Bachelor of Arts degree from Albion College in 1954. He was a proud graduate of the University of Michigan Medical School (MD) in 1958, graduating in the top of his class. He completed his Internship at the University of Nebraska Medical School Hospital in Omaha. Dr. Cutcher served in the United States Navy Medical Corp from 1959 to 1962 and was stationed in Yokosuka, Japan, then aboard the USS Montrose, and lastly at the Naval Hospital, San Diego, California. He was honorably discharged in 1967 from the US Naval Reserve. After his military service he did his Residency in Internal Medicine at the University of Michigan Medical School in 1962 and 1963. Dr. Cutcher was a Diplomat of the American Board of Family Practice from 1970 until his retirement. He practiced medicine in San Diego, California from 1963 to 1973 then returned to Michigan where he owned and operated the Deckerville Medical Clinic on Black River Street with an interlude of practice in California and North Carolina. His retirement from medicine was in 2005 in Deckerville. He maintained his MD license until the time of his death. At Deckerville Community Hospital he served as Chief of Staff, assisted with numerous surgeries and delivered hundreds of the community’s babies. Dr. Cutcher was a member of the American Medical Association; Michigan State Medical Society; Sanilac County Medical Society, serving as President and Secretary/Treasurer; American Association of Family Medicine; and Michigan Association of Family Physicians. Dr. Cutcher was also a member of the U of M Victors Club and attended as many football games as his schedule allowed. He displayed the Maize and Blue colors faithfully. As a teenager he was a member of the Capac United Methodist Church then later of the Deckerville United Methodist Church. Additionally he was a Patron of the Metropolitan Opera, New York, New York. He had a great love for opera, especially those of Richard Wagner and Giuseppe Verdi. He was a caring and supportive brother to all his family. Dr. Cutcher is lovingly remembered by his brother and sister-in-law, William and Pat Cutcher of Capac; sisters and brothers-in-law, Elizabeth and Robert Burgess, Almont, Dolores and Frank Vanpoelvoorde, Armada; 11 nieces and nephews; special family friend, Irene Cole , Deckerville; and many cousins and friends. He was predeceased by his parents, step mothers, Ann and Evelyn; and nephew, Brian Landon. Visitation for Dr. Cutcher is Tuesday, August 6, from 2:00 to 8:00 pm and Wednesday, August 7, from 11:00 am to 1:00 pm at the Apsey Funeral Home, Deckerville. Service is Wednesday, August 7 at 1:00 pm at the Apsey Funeral Home, Rev. Robert A. Srock officiating. Interment will follow at Downing Cemetery, Deckerville Memorials may be given to the Robert I. Cutcher M.D. Scholarship at the Deckerville Community School, the Deckerville Community Hospital, or Downing Cemetery Association. Arrangements entrusted to the Apsey Funeral Home, Deckerville. Condolences may be sent on-line to apseyfuneralhome.net

Dr. Robert Irving Cutcher, M.D. of Deckerville, our beloved brother, uncle, and friend passed away peacefully at his home on Thursday, August 1, 2019. He was 86 years old. Robert I. Cutcher was born on December 11, 1932 in Trafford, Pennsylvania... View Obituary & Service Information

The family of Robert I. Cutcher MD created this Life Tributes page to make it easy to share your memories.

Send flowers to the Cutcher family.