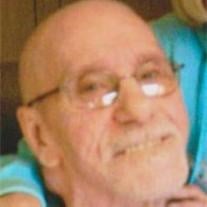 Robert J. Schmitt, age 74, of Carsonville, died Monday December 26, 2011 in his home. He was born January 5, 1937 in Detroit, the son of the late Charles J. and Marie M. (Lalumiere) Schmitt. Bob married Miss Helen Licht on February 9, 1957 in Detroit. He was a former employee of the Chrysler Corporation. He enjoyed painting, woodworking, golfing, jazz and listening to Neil Diamond, but above all he enjoyed his family the most. Robert is survived by his wife of 54 years, Helen of Carsonville, three sons, Robert A. Schmitt of Snover, Mark F. Schmitt of Deckerville, Larry C. (Kerrie) Schmitt of Madison Heights, two daughters, Mrs. Theresa (Paul) Campbell of Madison Heights, Mrs. Cheryl (Mike) Titus of Lexington, ten grandchildren and seven great grandchildren, one brother Joseph (Grace) Schmitt of Lake City. He was preceded in death by one daughter, Marie on June 12, 1979 and by four brothers and one sister. Cremation has taken place in Sunset Valley Crematory, Bay City. Arrangements were by the Apsey Funeral Home, Deckerville. Condolences may be sent to http://apseyfuneralhome.net/

The family of Robert Schmitt created this Life Tributes page to make it easy to share your memories.

Send flowers to the Schmitt family.