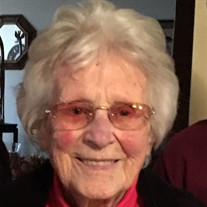 Rosamond Buhl, age 105, passed away Tuesday December 4, 2018 in Autumnwood of Deckerville. She was a lifelong Deckerville area resident who was born December 14, 1912 in Cedardale the daughter of the late Noah and Theodosia (Turnbull) Davidson. She married Lloyd F. Buhl on October 26, 1940. He preceded her in death October 12, 1997. She was a graduate of Deckerville High School and attended the FERA college here. She resided in Marion Township all her life and was active in the operation of the Deckerville Recorder and the Carsonville Journal for fifty years. She was an employee of the Deckerville Community School District for five years and operated the first office of Michigan Secretary of State in Deckerville. Mrs. Buhl was Village Assessor of Deckerville for over 50 years, Secretary of the Marion Township Zoning Board for twenty years, was a charter member of the Deckerville Lioness Club, a forty year member of the Deckerville Woman’s Club. She was an avid bowler for many years, enjoyed doing jigsaw puzzles and attending the Senior meal site. She was a member of the 1st Presbyterian Church of Deckerville. Rosamond is survived by one daughter, Marcia Buhl (David Carstensen), Buffalo, NY; three sons, William C. (Leslie) Buhl, Paw Paw, MI; Robert L. (Laureen Hehn) Buhl, Miami, FL; Karl E. (Joanne) Buhl, Deckerville; 22 grandchildren, 34 great grandchildren, 6 great great grandchildren, several nieces and nephews and longtime caregiver, Liz Booms. She was preceded in death by husband, Lloyd F. Buhl, four brothers and eight sisters. Memorial services will be held at 12:00 PM., Saturday, December 15, 2018 in the Apsey Funeral Home. Pastor Mark Garavaglia will officiate. Burial will be in Downing Cemetery. Visitation will be 11:00 AM. Until time of service in the funeral home. Memorials may be given to the Deckerville Community Center. Condolences may be sent on-line to apseyfuneralhome.net

Rosamond Buhl, age 105, passed away Tuesday December 4, 2018 in Autumnwood of Deckerville. She was a lifelong Deckerville area resident who was born December 14, 1912 in Cedardale the daughter of the late Noah and Theodosia (Turnbull) Davidson. She... View Obituary & Service Information

The family of Rosamond Buhl created this Life Tributes page to make it easy to share your memories.

Send flowers to the Buhl family.