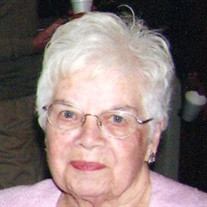 Rosemary A. (Rosie) Bowerman, age 96, of Pt. Sanilac, formerly of Bridgehampton Township, passed away Tuesday May 10, 2016 in Stonegate Village Assisted Living facility, Sandusky. Rosie was born July 12, 1919 on the family farm in Palms, MI. She was the daughter of the late William C. and Beatrice I. (Heilig) Brady. She grew up in the Palms area. Attended the Palms Country School and later graduated from the Deckerville Community High School. After graduation she attended Beauty School in Detroit. On January 31, 1941 she married L. Steve Bowerman in Disco, MI, he preceded her in death on June 16, 2006. Rosemary and her husband raised six children on the family dairy farm south of Deckerville, which she was very active in running the household and helping around the farm, along with being a member of the McGregor Methodist Church where she also helped with the Methodist Women’s Society for many years. She worked as a nurse’s aide for 20 years at the Deckerville Community Hospital and was also a former employee of DOTT manufacturing. She enjoyed ceramics, reading her Bible, gardening and being with her family. She is survived by five sons and one daughter, James (Judy) Bowerman of Carsonville, Doug (Cynthia) Bowerman of WA, Dwight (Majel) Bowerman of FL, John (Connie) Bowerman of Deckerville, Nancy (Tom) Cosenza of Ludington, and Paul (Lisa) Bowerman of AZ, eleven grandchildren, forty two great grandchildren and nine great great grandchildren, three brothers, Mike Brady of Hope, Maurice Brady of Linden, and Tom Brady of MN, and several nieces and nephews. She was preceded in death by three sisters, Irene Toal, Alice Jurzek, and Viola Wells, and one brother John Brady. Funeral services to honor the life of Rosemary A. Bowerman will be 1:00 PM Saturday in the McGregor Methodist Church. Rev. Jerry Griggs will officiate. Burial will be in Downing Cemetery. Visitation will be 2:00 PM-8:00 PM Friday in the Apsey Funeral Home and from 11:00 AM until the time of service on Saturday in the church. Memorials may be given to the McGregor Methodist Church, Gideon’s International, or the American Cancer Society. Condolences may be sent on line to apseyfuneralhome.net

The family of Rosemary (Rosie) Bowerman created this Life Tributes page to make it easy to share your memories.

Send flowers to the Bowerman family.