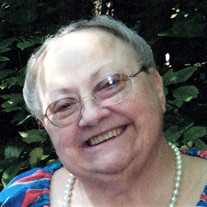 Sharon D. Warczinsky, age 76, of Palms, passed away Thursday December 15, 2016 in Port Huron McLaren. She was born March 10, 1940 in Detroit, the daughter of the late Clements and Maryanna (Dorman) Mazzoline. She married Walter Warczinsky on October 21, 1972 in Palms. He preceded her in death on January 19, 2002. Sharon was a member of St. John Lutheran Church, Palms. She was a former Michigan Bell Telephone operator. She enjoyed Toll Painting, sewing, baking, and quilting. Mrs. Warczinsky is survived by three sons, Brian (Paulette) Warczinsky of White Cloud, Frederick (Sharon) Warczinsky of Millington, and Christopher (Kysha) Warczinsky of Snover, four grandchildren, Alexander, Kristy, Keegan, and Colter and one great grandchild, Jase, one sister, Mrs. Judy Ziemba of Romeo and several nieces and nephews. She was preceded in death by one brother James Mazzoline. A memorial service to celebrate the life of Sharon D. Warczinsky will be held 1:00 PM., Sunday, January 15, 2017 in St. John Lutheran Church, Palms, Pastor Henry Hales will officiate. Cremation has taken place at May Memorial Crematory. Visitation will be from Noon until the time of service at the church. Memorials may be given to the Family Discretionary Fund. Condolences may be sent on line to apseyfuneralhome.net

The family of Sharon D. Warczinsky created this Life Tributes page to make it easy to share your memories.

Send flowers to the Warczinsky family.