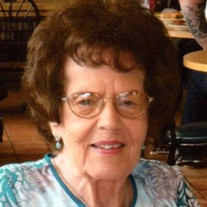 Shirley H. Russell, age 89, of Palms, passed away unexpectedly, Sunday February 3, 2019 in her home. She was born April 25, 1929 in Deckerville, the daughter of the late William and Helen (Raymond) Greene. Shirley grew up in Deckerville and attended Deckerville Community School. She enjoyed playing cards with her family, especially beating her grandchildren at Tonk. Family was the most important part of her life. She also enjoyed bowling, watching sports, music and flowers. She was a member of Trinity Lutheran Church, Forestville, where she was active in the Ladies Aide. On April 5, 1947 she married Clare E. Russell in Monroe. He preceded her in death May 18, 2017. Shirley is survived by two sons, Thomas (Karin) Russell and Richard Russell both of Palms; two daughters, Carol Whiting of Port Huron, and Marsha (Mike) Pozsgay of Snover; nine grandchildren, eighteen great grandchildren; sisters-in-law Audrey Schock of Saginaw, Clarice Montney of Traverse City, Peggy (Walt) Montney of Lapeer and Marion Greene of Elk Rapids; brothers-in-law, Clark Russell of NC, and Glenn Russell of Sandusky. She was preceded in death by one brother, William Greene and one sister Mary Russell; brothers-in-law Don Montney and Harold Schock and sister-in-law Stella Russell. A funeral service to honor the life of Shirley H. Russell will be held noon Saturday February 16, 2019 in Trinity Lutheran Church, Forestville. Pastor Henry Hales will officiate. Burial will be in the church cemetery. Visitation will be from 11:00 AM until the time of services at the church. Memorials may be given to Trinity Lutheran Church. Condolences may be made on-line at apseyfuneralhome.net

Shirley H. Russell, age 89, of Palms, passed away unexpectedly, Sunday February 3, 2019 in her home. She was born April 25, 1929 in Deckerville, the daughter of the late William and Helen (Raymond) Greene. Shirley grew up in Deckerville and... View Obituary & Service Information

The family of Shirley H. Russell created this Life Tributes page to make it easy to share your memories.