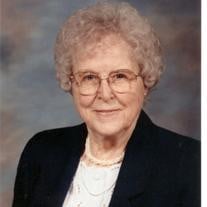 Vera Bernice Cripps, age 92, passed away on Thursday December 24, 2009 at Bickford of Portage, Michigan where she has resided for the last three years. Vera was born to Thomas and Edna (Cleland) Hooper on October 14, 1917 in Deckerville. Vera married Phillip Arthur Cripps on September 12, 1942 at the home of her parents. Phil and Vera were life long dairy farmers on Palms Rd. Raising her three daughters, sewing clothes, keeping a spotless home and helping Phil with the farm chores were her life. Attending Deckerville Bible Church was her top priority where she was active in the Fidelity Ladies Group. Vera was very active in the Farm Bureau and Home Extension groups. In the winters, after retirement, she enjoyed going to Florida where they had a residence in Bradenton. After Phillip passed away Vera built a new home in Deckerville where she resided for the next 14 years. She is survived by her three daughters and sons-in-law, Carolyn (Bill Bonner) Curtis of Port Hope, Thelma (Bruce) Hoover of Portage, and Janice Eagle of Colonial Heights, VA. Vera is also survived by eight grandchildren, twelve great grandchildren and one very special nephew, Orville, plus other nieces and nephews. Vera was predeceased in death by her parents, husband Phillip, brothers Harold, Stanley, Grant, and Gordon, sisters, Alice and Ila. One son-in-law Eugene Curtis, also, predeceased her in death. Carolyn and Janice would like to say a special thank you to Thelma for the care she provided Mom the last three years. Funeral services to celebrate the life of Vera B. Cripps will be held on Wednesday at 11:00 AM., in the Apsey Funeral Home, your ?Legacy of Life? funeral home. Rev. Jeff Homan of the Deckerville Bible Church will officiate. Burial will be in Downing Cemetery.

Vera Bernice Cripps, age 92, passed away on Thursday December 24, 2009 at Bickford of Portage, Michigan where she has resided for the last three years. Vera was born to Thomas and Edna (Cleland) Hooper on October 14, 1917 in Deckerville. Vera... View Obituary & Service Information

The family of Vera Cripps created this Life Tributes page to make it easy to share your memories.

Send flowers to the Cripps family.